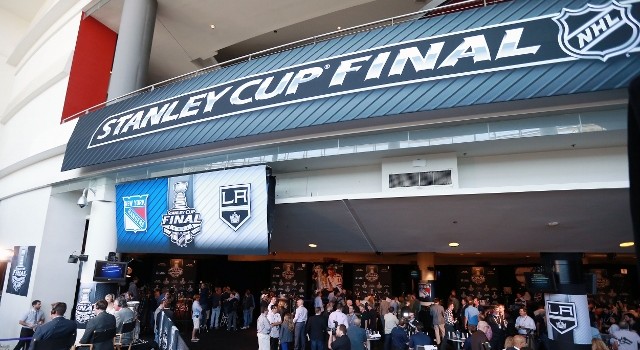 Dean Lombardi, on Drew Doughty’s maturation:
Well, I think you’re seeing what was always in him, even in junior hockey, world junior tournaments. He’s incredibly competitive. The thing I’ve noticed the last year in particular, I think he’s really learning to channel that competitiveness in the right direction. I think sometimes it would get the best of him. I think you’re starting to see also, which was always in him, there’s some leadership that’s very underestimated in him. So to me he’s growing not only as a player, but as a man. It’s pretty neat to watch. [Reporter: It’s taken a while to get the leadership out of him, hasn’t it?] That’s the way it should be. Being a top draft pick or being paid a lot of money doesn’t all of a sudden anoint you as having the qualifications to lead. You have to pay your dues. You learn from older players. Sean O’Donnell, Rob Blake, some of the players he broke in under. That’s a progress. You don’t just flick a switch.

Lombardi, on being one of the senior general managers along with Glen Sather:
That would just take too long to answer. There’s so much that goes into that. It’s pretty scary to look at the GM book and see myself fifth in seniority. I will say one thing about this. I worked in Philly for three years. Part of the qualifications for that job was I had to learn to hate the Rangers in a hurry. But you’re right, Glen is one of the icons in this business. He’s also been very helpful to me earlier in my career. It’s pretty neat.

Lombardi, on the impact of Doughty as a “cornerstone” of the franchise:
There’s certainly critical players. I think what Darryl alluded to right at the beginning is very important. These guys are a team. You have 23 guys that stick together, never point fingers. Quite frankly, there’s no way you’re going to get through what they got through if you didn’t have a group that cared about each other and cared about the right things. No chance. Now in Drew’s case, you look at every great team in history, they’ve always had that great defenseman, whether it’s Lidstrom, Zubov, Chelios, go right through the list. We all know how important those guys were. He’s got a ways to go to catch those guys, but that’s his goal, to be in that class someday.

Lombardi, on the Marian Gaborik trade:
That’s where your pro scouts come in. This is something Darryl and I had talked about last summer. We were always a top defensive team. You want to be able to do both, but you never want to lose that hallmark of what our success has been in being a good defensive team that’s hard to play against. It had to be a player that most important fit, that gave us an element, that was willing hopefully to buy into what it takes to play here. All the research that Robby and Alyn McCauley did in terms of whether he would fit in, we felt it was worth taking a shot at it. But the thing, too, with the timing, it’s the fit of the player, what type of character he has, but also the timing of when you bring in a player of that caliber. Certain things have to be established for a franchise before you do something like that. I think the thing that jumped out at me, the first thing we got him, the way the players embraced him is critical to, you know, you’re not a rental, you’re not a mercenary, we’re going to get you in this family, in this circle in a hurry. Carter taking him to his house instead of making him stay at a hotel, Mike Richards taking him to breakfast. The way they’ve embraced him has made this transition easier for him and got him to buy-in.

Darryl Sutter, on what he is most proud of this postseason:
I think everybody’s played really well. Hasn’t been based on one or two guys or a star factor.

Sutter, on Gaborik’s playoff impact:
I think Marian has been a really consistent player for us through 21 games. That’s not easy to do over the course of when you’re probably against the other team’s top defensemen, top checkers, top players. I think that would be the number one thing from a coaching standpoint, I’d say he’s been very consistent.

Sutter, on what team he and Sather were fans of while growing up in Alberta:
I think when we were growing up, because there were only six teams, a couple were Chicago, a couple were Toronto, Brian was Detroit, Glen Sather grew up as a boy in our hometown. We were more familiar with Glen as a player, meaning he played in Boston, played in New York. We knew that. Then he went to the Oilers. Obviously being from Alberta, Glen Sather won five or six Stanley Cups, and he wore all the hats. A lot of respect for Glen, as Dean said, over the years we’ve known him, on the ice, off the ice. He’s the whole deal.

Sutter, on the challenge of readying his players for Game 1 after an emotional series:
Even though it’s the Stanley Cup Final, Game 1 tomorrow, we’ve been able to do that pretty consistently, not just this season, but the past couple seasons. I mean, you’re doing it a lot on the road, a lot with travel. If you look at this year, the time between series was not very much. You had to get going again. We went into Chicago and played really well in Game 1. Sort of the same thing. There wasn’t much break to it. Just reset and away you go again.

Sutter, on his “three-two league” reference and the defensive tendencies of a series against the Rangers:
When you go back to that number, if you give up more than two goals a game, you’re looking for trouble all the time. It’s a tough number to reach. If you look at the regular season, we finished with the best goals-against in the league, just over two, and that’s a mark that’s really hard to hit. That’s always a good goal for your team. Do I see that as how this series will be? Certainly, if they’re going to score three goals, we’re going to have a tough time.

Sutter, on where Doughty ranks amongst the players he’s coached:
I think Chelios was the best all-around defenseman that I had the opportunity to coach. So I’d say that Drew would be trending more towards that type of player in terms of the all-around part of it, in terms of the whole package part of it.