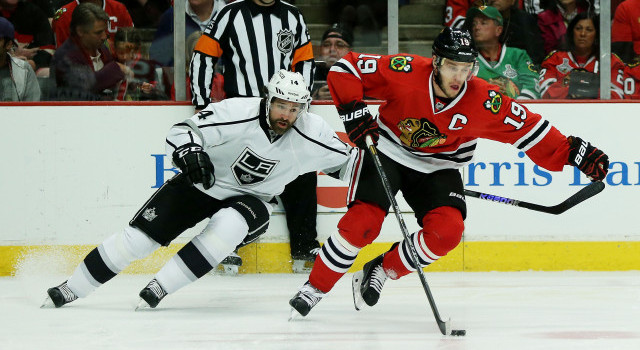 Justin Williams, on how Marian Gaborik makes the team different compared to last year:
I believe Marian’s skill set speaks for itself on the ice. But fitting in with a hockey team is not just going out there and playing the game. To be a part of the team, you have to be a part of the team on the ice and off the ice. Marian has fit in quite easily. Whereas looking at his stats, he can be a pompous jerk. He’s actually a pretty nice guy. [Gaborik: Thank you buddy.] He’s fit in real nice with us. I think that’s why he’s had a lot of success on the ice as well, because everybody has taken to him.

Williams, on whether the team is comfortable playing from behind in a series:
We’re really not proud of those three game losing streaks, but we’ve been able to overcome them. The further along you get, the tougher the teams are. To be the best, you have to beat the best. We’re not going to be totally overwhelmed and distraught if we don’t win the next game, but it’s certainly an important game for us, Game 2. Last year, we lost the first two here and we don’t anticipate doing the same this year.

Williams, on whether a rivalry with Chicago is developing:
Perhaps, but a rivalry only exists when the other team wins. We haven’t beat them yet. We have that set for us and we need to rise to the challenge.

Williams, on Chicago having won eight of the last nine meetings against them:
Certainly I think the playoffs and regular season are two different animals. Obviously we didn’t have a great record against Anaheim during the regular season. We were able to beat them. But Chicago just comes with its own problems. Their defense are extremely fast and active and do a great job getting the puck up the ice. If we’re just a little off every game, we’re not going to be good because they’ll expose that. They’ll have guys swinging, guys stretching and if you give them time they will make you pay. They’re very dynamic. So we need to have every guy on our team playing the same way, with the same urgency and playing on your toes instead of your heels.

Williams, on whether there is a fine line when creating traffic in front of a goaltender:
I think the NHL has put more of a focus on protecting goaltenders, which they should. Whenever you’re near the net – Marian can attest to this too – there are always referees yelling at you. If you’re in the blue paint ‘Get out of it. Get out of it.’ There are a lot of warnings out there too. They’ll say ‘Hey, I might not have counted that goal because you were obstructing him a little bit.’ You just have to watch where you are, watch where your feet are. You have to be aware of your surroundings. You don’t want to be that guy who has an obstructed goal taken back, because in the playoffs every goal and every play is important and has an impact on the series. [Reporter: Are you satisfied with the consistency of how that rule is called?] I mean there are a lot of gray areas in it. But I think for the most part, as hockey players, we feel that at the end of the day you’re going to get what you deserve. If you deserve to win that game, most likely you’re going to win it. If you don’t, then you roll the dice and see what happens. But if you play the way you’re capable of, you play the way that you should and you dictate a game then you feel like those types of things won’t matter.

Williams, on Marian Gaborik’s ability to create offense in the playoffs:
Well you might have to ask him that. But as a spectator watching him, his first three strides to get open are some of the best in the league. A lot of us wish we had those steps. He’s quick and he finds open ice and it doesn’t take him long to get a shot off. If you watch him, he’s quick. Even in practice, you watch and you see how quick the shot gets off and how hard it is. That’s something that not a lot of people have. He’s been able to score a lot of goals in the league that way.

Marian Gaborik, on adjusting to playing with Los Angeles:
Well I think it took me a few games, that’s for sure. Especially coming to a new system and going from playing on the right wing to left wing. But we had that winning streak they were on and I jumped right into things and that definitely helped to come in and be a part of winning games. It just kind of took off from there. Playing with Kopi and Willie, that definitely helped with the transition and it kind of took off from there.

Gaborik, on how the team made him feel welcomed off the ice:
To start on the trip, we were on a Canadian trip, so I got to know the guys off the ice as well. Very good group, a great group of guys and they welcomed me very nicely. I was very excited to be a part of the team.

Gaborik, on whether the Chicago defense is underrated:
I don’t think it’s underrated. They get a lot of credit. I think their top four guys, they have their names around the league and they’ve been part of the winning team and that definitely helps them to get recognition around the league. In terms of us playing against them, we had some success in their zone and we want to keep them in their zone as much as possible and create chances there. We had some zone time, but you have to generate more to get to Crawford and to get some goals.