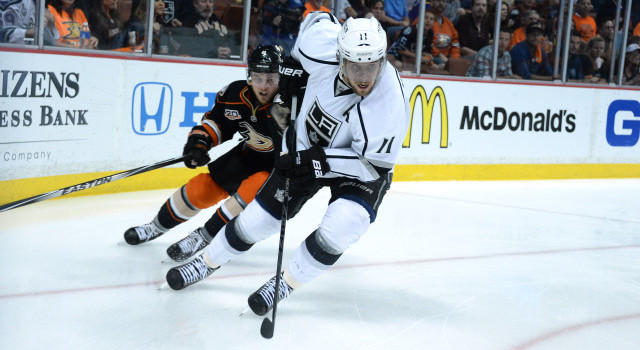 On reaching the Western Conference Final for the third straight year:
I mean, we’re not playing for the Conference Finals. It feels good, but we’ve got one goal in mind, so it’s not a secret.

On whether he was surprised by the team’s start:
We were talking about good starts. You guys have been blowing up that whoever scores the first goal wins the game. We figured we were going to do that pretty quick. [Reporter: I guess that changes when you score the first three goals. That’s probably a pretty good start.] That’s a little bit better, yeah. Playing with a three goal lead, or with a five goal lead, it’s better than the one-goal lead.

On why this was the most lopsided game of the series:
I don’t think anybody expected it to be that high scoring. But we got on a roll, I think Justin’s was a power play goal, and we took off after that. We felt pretty good, and we knew that this would have to be our best game of the series, and I think it was.

On Justin Williams’ Game 7 performance:
Yeah, I don’t know how he does it. I don’t know if he eats anything different before the game. I don’t know. [Reporter: Maybe you’ll have what he’s having?] No, I’m just going to keep having what I’m having. That’s all right. You know, he’s a leader on the team, and I guess so and so years ago, Dean got him for a reason, and it’s been definitely paying off.

On why nothing seems to bother this team when pressured:
Well, it’s in this room. We don’t look outside too much. We believe in this room, and that’s the most important thing. We trust in each other, and when you throw a little desperation and urgency on top of it, we’re playing pretty good hockey.

On what he said to Teemu Selanne in the handshake line:
Just congratulated him on his outstanding career. I told him it was a privilege to play against him.