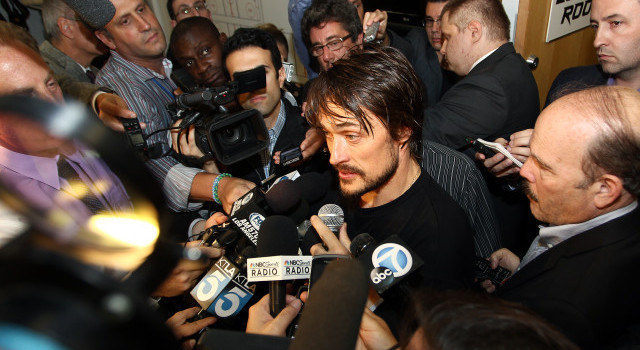 Ryan Getzlaf on the loss:
Game 7, obviously anything can happen. They came out, got some quick goals and never really looked back, really tough emotions right now.

Getzlaf, on how Los Angeles got out a 3-0 lead in the first period:
They came out and played the way they can play. They’re a good hockey team. There is no doubt about it. They know what they’re doing in these situations. They’ve proven it.

Getzlaf, on what he said to Teemu Selanne after the game:
Nothing really, there is nothing really to say at this point. It’s tough. It’s not the way we wanted send him off and obviously I’ll have some conversations with him down the road here.

Getzlaf, on whether Los Angeles did something different in their game plan:
I’m not going to sit here and dissect the hockey game. They’re a great hockey team and I have a lot of respect for a lot of guys in that room. They came out and they beat us tonight.

Teemu Selanne, on what was going through his mind as the game came to an end:
I was obviously very, very disappointed. I knew that it’s either going to be an unbelievable, big party or a huge disappointment and nothing in between. This time it was not the party. I’m very disappointed, like I said, right now. Especially the way we came into Game 7. That’s what hurt most. We had no business there and the numbers and that’s the saddest part. It’s a funny game. We had our chances. We just couldn’t take advantage of them. That’s how it goes. It’s very, very disappointing.

Selanne, on the tribute Los Angeles gave him after the game:
Unbelievable class, a lot of respect and this is what hockey is all about. Obviously we compete hard, but then after all it’s a lot of respect. A class act behind that. That meant a lot. It felt great.

Selanne, on what Los Angeles was saying to him in the handshake line:
A lot of guys said that they respect everything that I’ve done in my career. It was a pleasure to play against them and all the classy things. Obviously, I know those guys very well. Even during the lockout we were skating together and I’ve been playing golf with those guys. There is a lot of respect between us. Even we compete so hard and it’s a war out there, but after all when it’s over we’re all good buddies. That’s why this game is so special, a lot of class. That’s what I’m going to miss – these guys and this lifestyle. There is nothing like it.

Selanne, on whether he is rooting for Los Angeles through the rest of the playoffs:
Absolutely. Our team and their team are almost identical, and obviously when they beat us, of course, we hope they’re going to go all the way. That would maybe feel a little better to see that they were going to win it all. They have a chance. They have a great organization and a great team right now. They deserve this. Unbelievable, they came back against Sharks and then again here. You have to give a lot of credit to those guys.

Corey Perry, on Jonathan Quick:
He’s a tremendous goalie. I had a few chances there and those are ones I probably want to have back. The penalty shot, obviously it’s not what I wanted to do. He made a great play and poke checked me.

Perry, on Los Angeles saluting Teemu Selanne:
It’s pretty great for LA to stay on the ice and send him off that way. But that’s pretty special for him and this isn’t the way we wanted to send him [off]. Those things happen and we’ll get to sit with him for a little while.

Perry, on what Los Angeles did to gain momentum:
They came out and they jumped on us. Right from the first shift we gave up a couple chances and they never really looked back. They got that power play goal to get some momentum. That’s what every team wants, an early power play goal or early great shift and to create some momentum and confidence for your team. They did that tonight.

Bruce Boudreau, on how hard it is to handle the Game 7 loss:
We’ve got a few months to figure it out. We’ll get over it because you have to get over it. And secondly, by the time training camp comes around you’re just excited to be back playing hockey and you want to try to make amends for the last game. Right now, it’s a bitter pill to swallow and the way we lost that game. We’re going to get over it.

Boudreau, on the first period:
The first period was like men against boys, quite frankly. They were bigger, stronger, faster, seemed more determined. Whereas we were on our heels and everything we said we wanted not to do, we did. You get behind the eight-ball and then all the sudden you start getting more mad – whether it’s at the officials or whatever – and you don’t do your game. By the time we started playing well in the second, Quick was there to make the saves when he needed them.

Boudreau, on whether there was a lack of poise in Anaheim’s game:
You can call it whatever you want. I’m the kind of guy that, yeah we didn’t do things that we wanted to do but I want to give the LA Kings a little bit of credit here. They played like Stanley Cup champions. They never played like that in the first period like in any of the other six games. I think we were individually and collectively blown away by what they were doing. You’ve never seen them out-passing us individually as a player. I mean it’s like we were standing still and they were driving by us. We weren’t really good, but let’s not take too much away from them. They’re going to give Chicago everything they can handle.

Boudreau, on this being a learning curve for the younger players on the team:
We only say that when we lose. They have Pearson and Toffoli. They have young guys too and every team has young guys. Hopefully we’ll be better for it next year. To me, it’s an excuse.