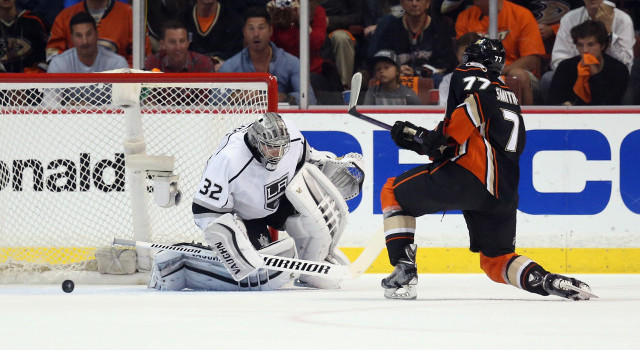 On the turnovers that led to Anaheim goals:
I think the first one was a bad corner. You know, Muzz falls in the Zamboni corner. That’s just bad luck, that goal. I think similar to last game, probably the second and third goal are close together. One was a power play goal, and then the turnover to Ryan Getzlaf. A player can’t make that play, that’s for sure.

On whether the desperation kicked in “a little too late”:
Nope.

On whether the team is missing Willie Mitchell and Robyn Regehr:
When you have injuries on your back end, always, because you’re not able to support it as well as you want. That’s the way it works with every team, but I think that what happens is you play guys up in different situations and, quite honest, we asked them to accept that challenge. I said that before. It’s got nothing to do with the wins and losses. It’s part of the challenge of when you have that on your back end.

On whether the team had a problem with shot quality and getting to the net:
I thought we did a really good job around their net. Our defense had more shots probably tonight than they had all series, and I didn’t really look at the numbers yet, but I think that’s really important, and to be able to get a lot of the traffic, we did a lot of that.