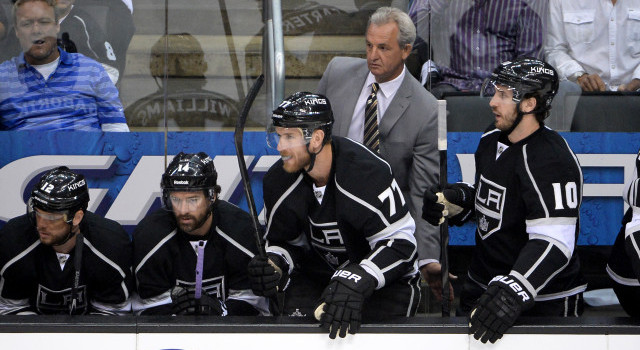 On facing a rookie goaltender:
No, it wasn’t that they were putting a rookie in goal. We were pretty sure who they were playing in goal. Bruce does it all the time. There’s a history of that. They trust all their goaltenders.

On whether the Kings will return to Jonathan Quick and “forget about what happened”:
Well, I don’t think goaltending’s an issue for our hockey team. [Reporter: What is the biggest issue right now? Is it shots, especially during the power play?] No, not shots. I think the ability to finish it off. We had trouble scoring against Anaheim. They’re doing a good job of keeping us to the outside, keeping top players to the perimeter. Give them credit for it. Not allowing them to get any time or space. Some of our top guys have to fight through it more. [Reporter: it’s kind of the theme of the series, because they were saying that after you guys were up two-nothing, that they weren’t getting second chances.] Yeah. You know what? In the series it took us overtime to score three, it took as an empty net to score three, it took us to pull the goalie last game to score two, and tonight we didn’t. It’s an issue.

On what it will take to “recover” from two straight losses:
Oh, I don’t know if I can. I don’t think I can recover. I mean, it’s almost impossible.

On home ice not having a major impact in the series:
We should’ve gone to Anaheim last night and bused over today.

On whether facing three different goaltenders impacts the team’s preparation:
No, I think, Cam, you have such a good background on all your goaltenders. We’ve seen Gibson, we’ve seen Anderson, we’ve Hiller and we’ve seen Bobkov, too, quite honest. So we’ve seen all them guys this year. We play Anaheim…[in] rookie camp, so those guys all play. You know what? In terms of our preparation, it doesn’t do nothing, quite honest. Players watch so much video on it, and they get so much information on it that it has no bearing on it unless somebody was way below standard, but that’s not the case.

On how to improve from averaging one shot per power play:
Tonight? [Reporter: Yeah.] Oh, jeez, good thing you told me. We only got one shot tonight per power play. That means jeez, I guess we’re going to have to shoot the puck more. [Reporter: Seriously, do you talk? What do you guys do from the bench, saying, ‘If we don’t shoot, we’ve got no chance here.’] I’ll remember that, yep, I’ll remember that.

On the importance of scoring first:
Yeah, you know what? It has been important, Pierre, and even Brian asked me that on the bench [during the TV interview]. That’s what he said, ‘Is scoring the first goal important?’ You know what? You don’t want to think it’s important, but obviously in this series, other than tying it up with a few seconds left, it is important. [Reporter: Why do you think it is so important? Is it just because goals are so tough to come by?] Because the teams are so good. It wasn’t the first goal tonight as much as in a minute and a half they scored the next one. It makes it two. When you think about it.

On whether Quick was pulled due to performance, or whether he was hoping for a reaction:
The guys who cover us lots [understand] historically I’m not a guy who pulls goalies. It’s not what I like to do.