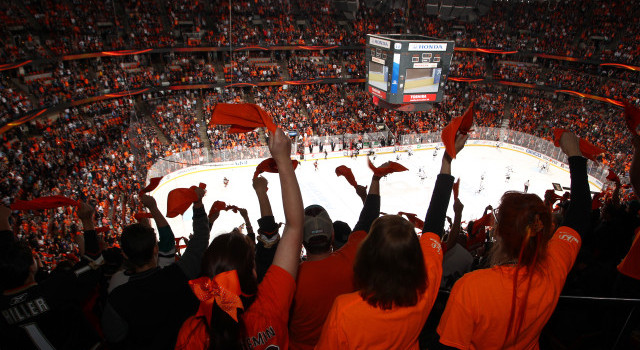 Bruce Boudreau, on whether Jonathan Quick was “the difference”:
I mean, he was pretty good tonight, but if you don’t get traffic in front of him, and you don’t go to the net, you’re not going to score. If he can see everything, he’s going to stop it.

Boudreau, on limited second chances:
There were no second chances. They blocked out, and we didn’t get to the front of the net to get the rebounds, to get the dirty, greasy goals, which is what we got all year. If we continue to play on the perimeter, we’re not going to have success against him. Simple as that.

Boudreau, on playing physical on Drew Doughty, and the defenseman’s presence in the series:
Well, he’s one of the best in the world, if not the best defenseman in the world. We acknowledge that, and we’re trying to get him off his game. But he’s on the ice all the time, and he’s a difference maker.

Boudreau, on whether Daniel Winnik will play in Game 3:
For what reason? [Reporter: He brings the jam. He goes to the front of the net.] He got six goals. He went 55 games without a goal. I love Dan Winnik, but those are not good reasons.

Boudreau, on moving Ryan Getzlaf away from Anze Kopitar:
Well, I did it because Kopitar’s line was dominating them. When they’re dominating them, I could be stubborn and leave ‘em out there all day, but we had to move something around to get away from it, and maybe his line could get something accomplished.

Boudreau, on Jonas Hiller’s performance:
He didn’t have a lot of chances against him. I don’t think the first goal was stoppable. The second goal went in off our guy. I think he had it covered at that point, but it changed directions. I mean, he made a couple good saves after that to keep it close, but I don’t think he had a lot of work to do.

Boudreau, on whether the game plan changes when falling behind Los Angeles:
We better score the first goal, evidently. When they’re playing a little more desperate they’re dangerous because they have some dangerous players, but you can see how stifling they can be just getting it, getting it out, and no matter how hard you’re trying to get it deep in the forecheck, they won a Stanley Cup two years ago. They know how to win. They know how to close the door.

Boudreau, on how Kopitar’s line was “dominating” Getzlaf’s line:
They were playing better than our guys.

Boudreau, on limiting Los Angeles’ chances:
They’re a team that shoots the puck. When they’re on top of their game, they get 35, 40 shots in a game. We haven’t done that well. It’s just a little solace. It does give you the idea that hey, listen, this series isn’t over. I mean, we played two good games and lost, and we could go into Staples and do the same thing and get a break here and a break there and win and come back here next week and be tied. Yeah, we’re depressed right now, because when you lose, you get depressed. But we’ll build ourselves up tomorrow, and we’ll be ready to play Thursday.

Boudreau, on how to coach going to the net in the playoffs:
You just said it. Hey, this is the playoffs. Get to the front of the net. I can’t do it for ‘em. So you tell ‘em to go to the front of the net. I mean, sometimes it’s not in the DNA. Sometimes our guys aren’t big enough to get there because their big defense are blocking us out pretty good, but they’re trying to get there. So you just tell ‘em you’ve got to find a way. You’ve got to find a way to get there. If they block you out and interfere with you, hopefully we’ll get the call.

Boudreau, on showing resilience throughout the season and being in a familiar position:
Yeah, we’ve been there. That’s why we believe that we can accomplish this. We’ve gone lots of streaks against good teams and been successful. So I mean, I don’t see why – I mean, obviously we’re playing a great team that’s peaked at the right time. But I think we’ve got the capabilities to take ‘em deep and doing what we need to do. It’s cliché, but it’s one at a time. I mean, if you’re looking at ‘Man, you’ve got to win four out of five, that’s a big thing,’…Hey, we just have to win Thursday. Let’s win Thursday, and then that’ll take care of itself, and then we’ll talk after that.

Ryan Getzlaf, on giving up a goal on the first shift:
That’s not the start that we expect out of our group, especially us up front. That’s not the way we can start a hockey game. That’s on us. We tried to work and get back at it after that. You can’t sulk on those things. We were able to respond pretty quickly after that.

Corey Perry, on not generating traffic in front of the net:
You have to battle through that. If you’re not going to accept that, you’re not going to have any chances to score. We had a lot of shots, but the quality of second opportunities we didn’t have. He saw a lot of pucks tonight. That’s the frustrating part because we talked about that before the game.

Perry, on going into Staples Center down two-nothing:
It’s a tough building to play in, but we’ve won there before. Hopefully we can go in and play that road game that we want to play. We’ve had success on the road this year and hopefully we can do that.