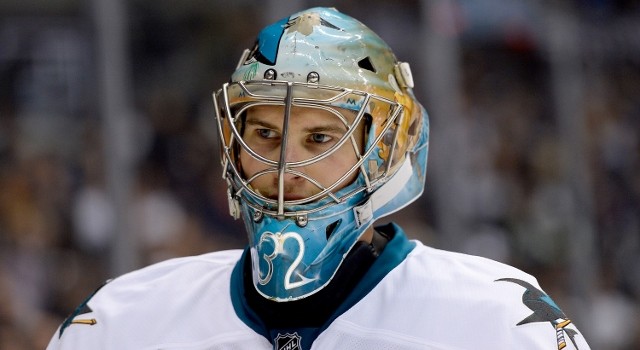 Justin Williams appeared to jab at a live puck lying between Alex Stalock’s skates and provided the momentum necessary for it to cross the goal line at 11:56 of the third period. It was deemed to not be a reviewable play by referee Chris Lee when awarding the goal.

Understandably, the Sharks were upset by the good goal call.

“We got cheated, simple as that,” head coach Todd McLellan said. “I was told that you could see the puck lying behind his feet the whole time and that’s why the whistle didn’t go. But it’s pretty clear when you look at it after. That was obviously the turning point in the game. Better move on and overcome it again.”

Something to consider in this instance – and it’s interesting that Lee deemed the goal unreviewable – is NHL Rule 69.6, Rebounds and Loose Pucks:

In a rebound situation, or where a goalkeeper and attacking player(s) are simultaneously attempting to play a loose puck, whether inside or outside the crease, incidental contact with the goalkeeper will be permitted, and any goal that is scored as a result thereof will be allowed.

In the event that a goalkeeper has been pushed into the net together with the puck by an attacking player after making a stop, the goal will be disallowed. If applicable, appropriate penalties will be assessed.

In the event that the puck is under a player in or around the crease area (deliberately or otherwise), a goal cannot be scored by pushing this player together with the puck into the goal. If applicable, the appropriate penalties will be assessed, including a penalty shot if deemed to be covered in the crease deliberately (see Rule 63 – Delaying the Game).

Alex Stalock, on what happened on the game winning goal:
I think everybody in the building saw that it was an innocent shot from the side that ended up getting tipped in front and it went between my legs. But from there, I guess it was lying behind my skates and they pushed it into the net and it was a good goal.

Joe Thornton, on the game winning goal:
I don’t know. Just from the bench it looked like Al had it covered for a little bit of time. The coaching staff felt like they were just pushing him into the net. So we’ve seen calls this year go the other way and calls go that way. There is nothing you can do. You just have to move on.

McLellan, on whether he thought it wasn’t a goal:
Thought? No, knew. Know now. Know now.

McLellan, on being told that the puck was behind Stalock:
Yeah, they could visually see it the whole time. [Reporter: What was the explanation for why they allowed the goal to stand?] Because the puck was loose I guess. I guess, I don’t know. It’s too bad we can’t interview them.