“Sharp” or not, Quick, Kings look to stem goals against 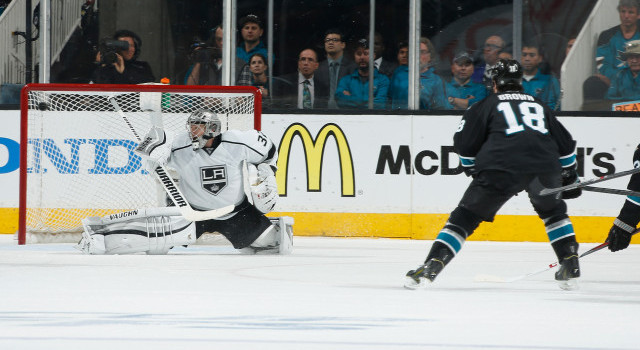 Jonathan Quick hasn’t had the most memorable opening to the playoffs, and he’d tell you that, according to Darryl Sutter.

“He still hasn’t been as sharp as he’d like,” the Kings’ coach said. “It doesn’t matter. I’m telling you what he’s telling me.”

It was a reflection that Quick weighed in on after practicing late Monday morning.

“I don’t know if it’s not feeling as ‘sharp,’ it’s just that I’m not doing the job,” Quick said. “I feel fine. When I’m going into the games, I feel good and I think it’s going to go the way we want it to go, but it hasn’t. You’ve got a routine that you’ve had for years that you feel works. It’s worked in the past. It hasn’t worked the past two games, but you’re just going to stick with your routine and you focus on the details. Like I said earlier, we’re trying to win one game and go from there.”

Whether it’s through the team sacrificing its well established habits to draw back into games in which they’ve spent 59:44 trailing by at least two goals, there have been a bevy of offensive chances he and the Kings’ usually airtight defense have had to fend off.

“I think trading chances with a team that’s a high-end offensive team is not a good idea, and that’s not a team function, that’s a three-or-four-guy thing,” Sutter said.

For a goaltender whose mask is decorated with a knight’s helmet, he surely possesses the appropriate mental armor.

On Quick’s disposition, Sutter said that “It’s not going to change.”

Though that decision would still be on the table for Game 3, don’t expect the Kings to abandon the goaltender who posted a combined .948 save percentage in first rounds over the last two seasons.

Jonathan Quick, on what he told his teammates when leaving the ice last night:
Nothing different than I say any other game.

Quick, on having a “Game 7 mentality”:
Every game is a Game 7 mentality. Game 1,2,3, right up and down. Obviously they won the first two Game 7s and we have to win tomorrow’s.

On any similarities to being down 2-0 to St. Louis last year:
That doesn’t matter. It’s the same feeling as you’re about to play a playoff game tomorrow. So whatever the series is at, we’ve been up 3-0, we’ve been down 3-1, been down 2-0. Same feeling. What we want to do tomorrow is win a hockey game, so that’s what we’re going to try to do.

On whether returning to home ice will help:
I don’t know. We’ll see. It shouldn’t matter where you play. You should play the same game home or away. We’ll see tomorrow. We’ll see if the outcome is what we want and then obviously you guys will say home ice means a lot. We’re going to try to win a game tomorrow.

On San Jose’s speed causing them problems:
I don’t think that’s the issue. I think there are some issues on our end that we need to clean up before we start saying it’s what they’re doing.

On what needs to be cleaned up:
“It’s a lot of things. I’ve got things to do this afternoon. I want to get on top of them.”