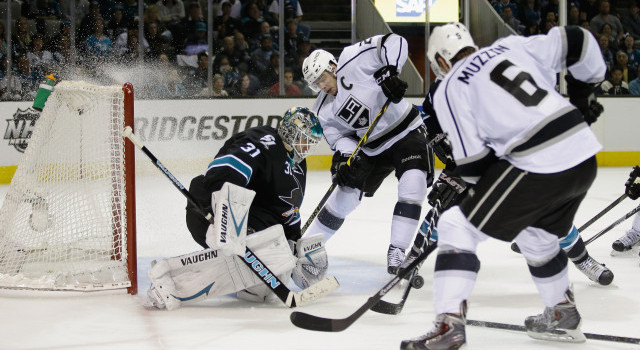 On what led to San Jose’s seven unanswered goals:
I don’t really know if it’s one thing in particular. Again, we gave up a lot of odd-man rushes again, even in the first. We were up 2-0, but they had a lot of good chances. We need all 20 guys to be on top of their game. If their fourth line can have that big of an impact on a game we have to have a response, and we didn’t have a response from anybody, really.

On being in a “new situation” and what he’d like to see returning home:
I wouldn’t exactly call it new. We were in this same situation last year. We came up here twice and didn’t get anything that we wanted. We got our asses kicked pretty much and now we go home and we have to take care of our home ice. It starts with the game on Tuesday. In a series like this, you remember the score but you move on from the game and get focused on Game 3, because that’s all you can do.

On what is contributing to San Jose’s odd-man opportunities:
I think part of it is the players they have on their team are highly productive offensive players. We were the best defensive team in the league this year and these two games we haven’t been close to our standard of play. Most of it’s off the rush and not managing the puck, which is what we’ve been good at all year. So that’s something we need to look at.