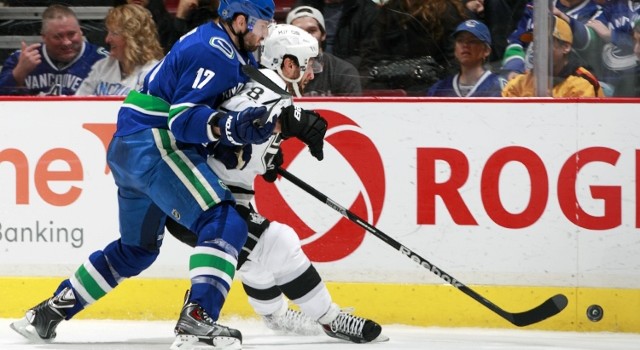 On the loss to Vancouver:
We played a hard game. I thought we played really solid. Obviously we were short a couple of guys on the back, and those penalties in the third, they took a little steam out of us, then Greener going down.

On whether he was surprised no interference was called on Alex Edler, considering the third period penalties:
Yeah.

On losing the game late in the third period:
You know what? I thought we played well. We scored one goal, a power play goal. It’s tough to win on the road. It doesn’t matter. Probably was going to be a 2-1 game tonight.

On Jonathan Quick showing a “temper” late in the game:
You know, it happens so rarely. It wasn’t that big a deal.

On Andrew Campbell’s performance:
We had to get minutes out of all four lines and out of all six defensemen. Finding a long stretch again, and coming in against a pretty good hockey club, a veteran team we were playing against. You had to get minutes out of ‘em, and for the most part, he was solid. I mean, that’s what you expect out of him. He’s going to get the puck and move it, and I’m sure the pace was an adjustment for him.