Kings edge ahead in the race for the Jennings Trophy 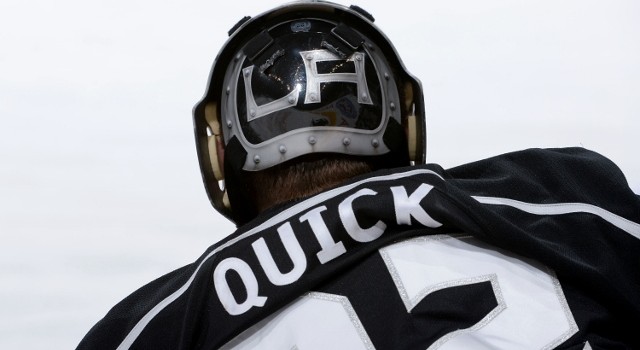 No Los Angeles King has ever won the Williams M. Jennings Trophy, an award presented to any goaltender who plays a minimum of 25 games on the team that allows the fewest goals against in the National Hockey League.

Because Martin Jones and Ben Scrivens will not meet the 25 game threshold, this award will go to Jonathan Quick should the Los Angeles Kings eke out a narrow victory over the Boston Bruins in the goals-against column. The St. Louis Blues are also in the conversation but a significant longshot to claim the trophy.

While Los Angeles had spent much of the season as the league’s top defensive team, Boston surged ahead during a 22-3-4 stretch before falling behind after allowing four goals in a 4-3 overtime loss in Toronto last night.

Should the Kings finish ahead of Boston and St. Louis in goals-against, it would remarkably be the fourth time the Jennings Trophy has been claimed by a goaltender on a Darryl Sutter-coached team. Sutter coached Ed Belfour when he won the award as a Blackhawk in 1993 and 1995 and coached the Flames when Miikka Kiprusoff was presented with the award in 2006.

“I pay a little bit of attention to it because it’s a team award,” Sutter said. “I think it’s good for our hockey club to be in it with Boston, a team from their side and a team from outside. I think that’s pretty interesting considering…probably at the quarter-pole, I don’t know if we’d be in the top-10. So we’ve come along pretty good. Give credit to everybody.”

He’s pretty accurate when referring to the quarter-pole. Entering the 20th game of the season, the Kings ranked 11th in the league by averaging 2.37 goals-against per game. Scrivens shut New Jersey out that night, shut the New York Rangers out the following night, and by the 32nd game of the season, following back-to-back Jones shutouts of the New York Islanders and Montreal, the Kings were atop the league in goals-against per game.

“I think our goaltending and penalty killing – there are a lot of things that we weren’t as sharp as we’d have liked…early. It was one of our goals coming into the year,” Sutter said. “I’m used to being associated with teams that are in the top handful in terms of goals-against, and last year even though we went to the conference finals, our goals-against had gone into the middle of the pack, and we wanted to get it back up to the top of the pack. At the end of the day, in the National League, that’s how we win.”

Last year the award was presented to Corey Crawford and Ray Emery of the Chicago Blackhawks.

Pumper Nicholl also has a nice write-up on the Jennings Trophy race at The Royal Half.

Dustin Brown, on contending for the Jennings Trophy:
I think we all take pride in being one of the better defensive teams. I don’t think getting an award like that justifies or is the reason we take pride in it, but I think we’ve always been near the top of the league just never at the top, top. A big part of that is our goaltenders. All three of them who have played for us this year have stepped in and played really well. Quickie is our guy. When he was out, the other two really carried the load for us. I think it would be nice to win, obviously. If we can have that from an accolades standpoint it’s nice, but that’s about all it is.

Darryl Sutter, on whether Jonathan Quick will get any rest over the final week:
Well, our schedule is broken up, if you look at it. We play Wednesday, Thursday in Calgary [and Edmonton], so really, we don’t play Sunday-Monday-Tuesday. Wednesday-Thursday, and then finish Saturday. We’ll just decide if he gets three or four or two. Really haven’t gotten to that point. 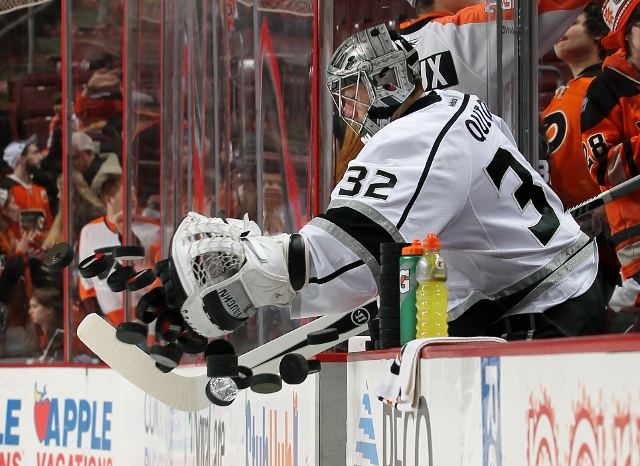