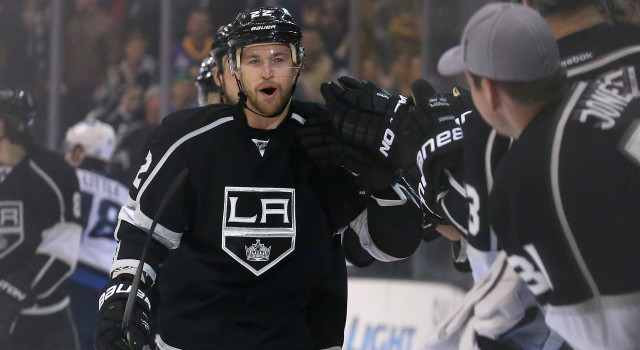 The Los Angeles Kings have averaged 3.6 goals per game over the last five games of their six-game winning streak, and as is natural in offensive surges, goals have come from secondary sources in addition to top players. Dwight King scored in back to back games on the road trip, including a game-winner in Philadelphia one week ago today. Alec Martinez has three goals in the last seven games.

And then there’s Trevor Lewis, whose first period goal against Winnipeg was his sixth goal in the last team’s last 28 games.

Since his two goals in the 4-1 win at St. Louis on January 16, here are Los Angeles’ goal scoring leaders:

This is notable, of course, because Lewis’ two goals against the Blues were his first two goals of the season. He went from scoring zero goals through his first 38 games to setting a career high in goals in his 66th game. His 6.1% shooting percentage is also a career-high.

“I know that early in the year I was struggling to score and I think it takes a lot of pressure off guys when guys that don’t score as much start scoring a little bit,” he said. “To chip in a little bit is always good.”

For a player who logs heavy penalty killing time and contributes in many facets of the game that don’t necessarily get recognized on the scoresheet, Darryl Sutter spoke on behalf of the most tangible aspects of his versatile skill set.

“That’s how we’ve handled him since we’ve been here,” Darryl Sutter said “He’s played somewhere between the third and fourth line, penalty kill, plays right wing-center. It doesn’t matter home-road. He wants to score more, and you want him to score more. Six is a career-high for him, so that’s why you’re writing about it, talking about it. Hey, you want him to score. That was always our target. When you talk to him at the end of the year the year we won the Cup, we wanted him to score 15 goals.”

Trevor Lewis, on valuing goal scoring as much as the other aspects of his game:
I think so, everyone wants to score. It’s fun to score too. It gives you a little bit of confidence and I think it really helps when the so called bottom-six contributes.

Lewis, on his goal against Winnipeg:
Cliffy cut to the middle and Muzz made a good pass to him and then Cliffy made a real good play off the wall to me in the middle there. I just tried to get it on and off my stick as quick as I could and luckily it found a hole.

Lewis, on whether he’s encouraged by the team’s play at this time of the year:
Yeah, I think so. I think we have four really solid lines that everyone can contribute on all four lines. I think it’s good that everyone is contributing and everyone is helping out.

Lewis, on whether his earlier lack of production weighed on him:
Yeah, you definitely think about it a lot and grip the stick a little tighter. It’s just nice to get one and get a little relief.