Saturday’s Los Angeles Kings win over the Winnipeg Jets was yet another in a long line of performances in which offensive dynamo Willie Mitchell continued to pull strings offensively while leading Los Angeles’ high flying offensive attack.

Well, maybe that’s overstating the role of the defenseman who has nine points in 70 games and turns 37 in under a month. But Mitchell notched two more assists on Saturday and has compiled four assists and a plus-five rating over the last five games, all Kings wins.

“I went horseback riding, and the guy gave me a horseshoe. I’ve got it sitting upright at the house and it’s supposed to catch all that luck.”

Maybe it’s the horseshoe, and maybe it’s simply a byproduct of the team’s raised offensive output as of late. During Mitchell’s four-point, five-game stretch, the Kings have averaged 3.6 goals per game and have relied on key goals from Dwight King, Trevor Lewis and Alec Martinez, not just Anze Kopitar, Jeff Carter and Marian Gaborik.

Or maybe it’s a symptom of strong team and rink-wide work from a group of players who reduced their magic number to clinch a playoff berth to five. Mitchell’s second assist on Saturday came when he got down to block a Jacob Trouba slapshot – “a little stinger,” as the defenseman recalled – allowing Tanner Pearson to shuffle the loose puck up to Tyler Toffoli, who scored on a contested breakaway.

“Usually that doesn’t happen that way,” Mitchell said of the blocked shot leading to a goal. “I didn’t know until after on the bench. I was cussing a little bit because it hurts and stings for a while and good thing it was more on the meat and less on the bone. It was kind of funny that it went the other way. Toff made a nice shot so we’ll take it. Get a little more breathing room and like I said, it’s just kind of part of the game.”

“My teammates do the same thing. That’s kind of part of my game and we had a bit of a scramble so you do what you have to do. Lots of guys have done that throughout the course of the year. You’re going to need that down the stretch and in the playoffs, right? Those are the things you have to do.”

Mitchell, on his spike in production:
It’s the ebb and flow of the season. To be honest, it’s been a bit of a challenging season for myself, coming off of two knee surgeries and not playing in 17 months. I didn’t feel good about my game and sometimes I think you can chase it, too. You can try too hard and you want to show your teammates. You want to show the coaches and show everyone that I’m back, I’m fine and all that. Sometimes when you do that, you chase it and you don’t play your game. I think from after Christmas on I’ve had a couple four or five games where I didn’t feel like I had my game. But after Christmas I kind of feel like it’s more of my game, and playing with Marty this year, we’re finding some real nice chemistry out there. He skates the puck well, he’s a good puck mover and I can try and take care of the reads defensively and cover a lot of ice. I think we’ve been playing well together and enjoying that and hopefully it can continue and hopefully save it for the right time of the year.

Mitchell, on Anze Kopitar:
I think he’s probably the best two-way player in the game right now. He’s good with the puck. He’s probably a passer first, shooter second, Kopi. So that’s a good mix with Gabby there and then Kopi and Stick have always played well together and it just seems like it will be a good mix.

Mitchell, on Anze Kopitar not having won the Selke Trophy:
Market brand, East Coast bias right? I’m very, very surprised actually. I played with Kesler in Vancouver, and no disrespect to Kes, but it’s like the last couple years it’s just how Kopi controls the game through the middle of the ice. It’s incredible what he does for our hockey club down low on the wall. No one can get the puck off of him. He uses his big body, big reach and sticks his big ass out there and that’s it. He protects the puck and he comes in and you see him on the power play and it’s just like just give him the puck. There will be two or three guys on him and he still finds a way to enter the zone and fight those guys off and get it setup on the offensive side. To be honest, as a defenseman you ask any of these guys here the defense and the center is what breaks a forecheck. If you ask any of the D-men on the team ‘If you can play with any center on the team, who would it be?’ Kopi in a heartbeat, because he’s always at the right place down low to make that easy little break pressure play and go. He’s a complete player. I think he’s been lucky to have some coaches along the way that really stressed defense and now he’s finding his game in all facets of the game, offensively, defensively. Like I said, I said it a long time ago and people laughed at me but you look at Datsyuk and you look at Zetterberg and stuff like that. That’s who he is. He’s that good. You watch every little clip and who do you see in the defensive zone right down by the goal line? It’s Kopi. And then somehow he’s on the other end of the ice leading the rush on a rush play. He skates very, very well. Doesn’t look fast, but he is fast for a big man. Kind of like Lemieux that way how you look at him and say ‘He’s not that fast,’ but he’s actually moving really quick. I can’t say enough good things about him. He’s a complete player for us and just an excellent teammate too, a really humble guy. 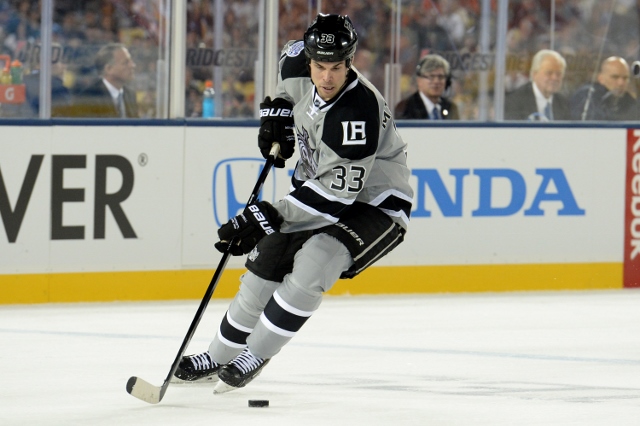