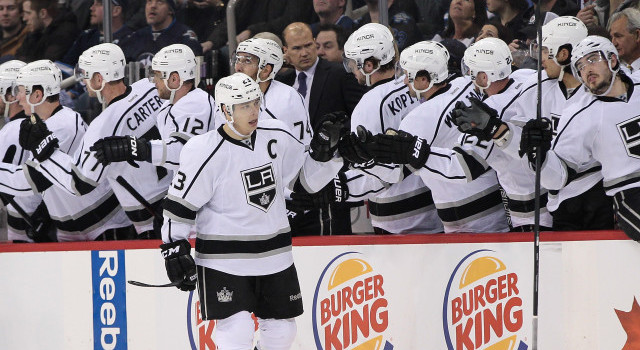 Dustin Brown, on the playoff seeding:
I like how the schedule is this year – where you play everyone and that sort of thing – but I still like the old playoff of one versus eight. We’ll see how it goes I guess. I just think the way its set up now, you could have arguably two of the best teams…You’re playing both divisions – you have San Jose and us. Hypothetically it could be St. Louis and Chicago in the first round, which are tough first rounds.

Brown, on his play after the Olympic break:
Sometimes, I haven’t had the year I wanted. Starting with day one, getting hurt…[and] not being able to get any real time in training camp and then it just snowballed from there. Sometimes you just need to reset. I went to the Olympics and focused on what I needed to do there. It just gave me a two-week kind of – not a break from hockey, but it was just a reset button from everything that was happening here, and sometimes that’s all you need to get back to square-one.

Brown, on the team’s recent performance:
I think we’re all aware of how we can play in here and it’s just a matter really of executing. I think the other thing is we’ve been a lot more balanced in our attack, in the sense that we have contributions from all the lines and that wasn’t the case when we were really struggling. We had a hard time scoring as a group of guys. It wasn’t a collective effort. I don’t mean that by an effort level, but from a straight production standpoint. We didn’t have a lot of guys producing and now we have more guys coming out of the break who are fresh and ready to go.

Brown, on the importance of yesterday’s recovery day:
I feel pretty good, personally. I think the schedule coming out of the Olympic break was pretty difficult. Days off are important, especially this time of year. Like I said, I think the two week break helped a lot of guys, but this time of year – it’s about being fresh and ready to go for game times.

Brown, on Marian Gaborik joining the team:
That’s why GM’s make the trades they do – is to try to get players that can come in and help us win. It’s been one game. So it’s really hard to kind of calculate or magnify anything from one game. It’s more about how he helps us down the stretch, and more importantly in middle-April and beyond.

Trevor Lewis, on how he has earned the best penalty differential on the team:
I think just kind of trying to keep your feet moving and using my speed a little bit. It helps maybe to get guys sticks in my feet and stuff. And taking penalties – I think penalty killing is one of the biggest parts of my game. So I don’t think I’m really helping the team if I’m taking penalties. I try and stay out of there. I didn’t know about that stat.

Lewis, on being effective on the forecheck:
It’s big for our team. I think it sets up our whole forecheck and allows us to play in the offensive zone. If you can get in there and pick the body up, keeping your feet moving, and stuff like that, good things are going to happen.

Lewis, on his comfort level at center:
Yeah, I mean it’s a little bit of an adjustment. I’ve played mostly wing this year, but I’m pretty comfortable at center too. Starting to feel better at it, hopefully keep going here. [Reporter: When you were coming up at Manchester, were you primarily a center or a wing?] I was both really. The same thing, so I’ve kind of switched off and on since junior.

Lewis, on playing on a line with Jordan Nolan and Kyle Clifford:
I think we’re trying to provide energy for our team and like I said, if that’s with hits or getting in on the forecheck or just being smart and keeping things simple. I think we can do a little bit better job at that. Hopefully get a little more comfortable playing together. Should be good, we’ve been playing better together. So it’s good.