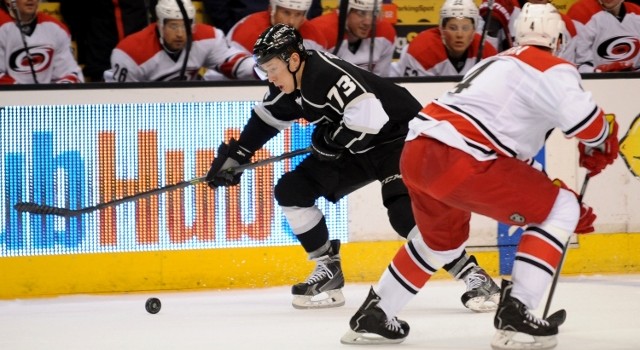 The Los Angeles Kings have been one of the league’s premier possession teams for several seasons, and a handful of the team’s top-six forwards are consistently amongst the league’s best forwards in Corsi ratings, which gauge the percentage of shot attempts (on net, missed shots, blocked) between the Kings and their opponents. When Anze Kopitar is on the ice, the Kings register 60.5% of all shot attempts. His “Corsi For” rating leads Kings forwards. Justin Williams, long a forward used as a model when possession metrics are referenced, ranks second amongst Kings forwards with a 60.4% Corsi For rating. Dustin Brown ranks third at 58.8%. Right behind Brown, Tyler Toffoli ranks fourth amongst Kings forwards with a 58.7% Corsi For rating.

Toffoli, who has been skating on the left side – his off wing – has seen his ice time drop each game since he logged 16 minutes and 53 seconds against Columbus in the final game before the break, though he looked comfortable on the left side and tallied two assists last Wednesday in the come-from-behind win over Colorado. He’s still looking to shoot the puck more frequently; since six of his shots were on net in the loss to Philadelphia on February 1, he has taken nine shots on goal in five games.

After Monday’s morning skate, Williams discussed Toffoli’s usage, and how the rookie forward enhances the team’s ability to hold onto the puck.

Justin Williams, on how Tyler Toffoli affects his line’s possession efforts:
I just think we have a lot of guys who just want the puck. I think that’s why our possession stats are so good. We don’t want to give it away. We want to hold onto it for a little bit. We want to make a play. We want to look and see if something is there and we want to create. I think that’s why we’ve been pretty good in that department. Tyler’s got great offensive instincts and not only does he make plays in the offensive zone, he seems to be making plays coming out of zone as well. That in turn transitions into us having more time with the puck.