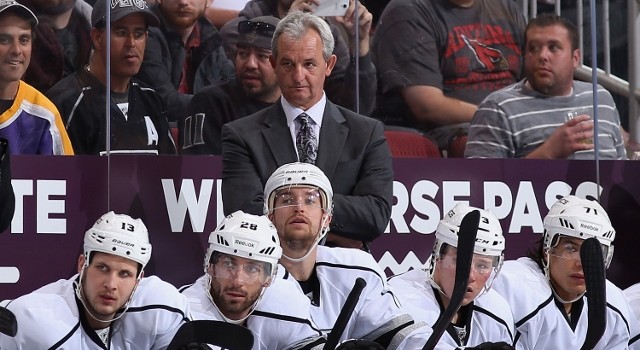 On the United States-Canada women’s gold medal game:
I’m glad the U.S. and Canada get to play for the gold…They both are the two best hockey nations in the world, for sure, for girls. The best part with me watching ladies’ hockey is there’s still a big connection now with I think there’s probably eight, nine, 10 girls, both teams, that are hockey families. So there’s a lot of connection there.

On Shannon Szabados being an Alberta native:
She fought the system – she had to go through the court system, two or three times growing up, to be able to stay in the tier level. She was arguably the best goalie in Alberta in her age group. Not just girls, boys too.

On his time away from the rink during the Olympic break:
I worked for the first four days. Did a lot of video. I was up on the farm for four days and came back. So I enjoyed it, yeah. You’re still not doing anything else. You’re just thinking about different things [about the team] all the time. [Reporter: Did you get anything out of that video that you can share with us?] Nope, just making sure we reinforce things we want to work on and things we can do different or better, or that we do well. The league and the division and the conference is all so close…if you’re struggling to score, some teams struggling with the goals against, there are so many different areas to it. When we come back, we play 23 games in 46 days, so we’re not going to be working on much again. Now it’s difficult to do anything else, though, because you’re not working with the whole group, and you can’t bury guys. It’s not training camp. It’s basically trying to make sure everybody’s sharp or healthy or in a good frame of mind. Those things.

On whether John Tavares’ injury affects his opinion of whether players should be available for the Olympics:
No. It’s part of it. Again, that’s an experience thing. I’ve seen guys go, and I’ve seen guys get hurt, and that’s part of it. If you lose somebody, that’s a choice that’s not that the player made to go, that’s a choice that the National Hockey League and the players made to go to that tournament. So is there going to be an injury? Yeah, there are lots of injuries. It wasn’t Tavares. Look at the injuries coming in…It’s not just John Tavares.

On whether he foresees a 3-2-1-0 Olympic point system applied in the NHL:
I hope not. Why? Because there are history books. The overtime change, the point change, the shootout change, that to me was enough. It’s just like watching [the United States-Canada women’s final]. Do you want that to go to a shootout? No. [Reporter: With respect to the shootout, would you like to see the NHL employ the Olympic format?] Yeah, the American League does that, I think. One guy can go more. After…five guys, or whatever in the American League, then one guy can go more. [Reporter: Would you be in favor of it?] I’m not in favor of the shootout. If it’s such a great thing, why don’t we do it at the start of the game, so players don’t have to worry about it at the end? We have such a great thing. If that’s all it is, just a spectacle, but if that’s the way teams get to make the playoffs, I totally disagree with it. There’s no team concept to it at all.

On Anze Kopitar’s Olympic performance:
I’ve been in contact with Kopi quite a bit over the early qualifying. I’m so proud of what he did, because at the end of the day, his family is instrumental in that team going, right? I’m proud of what he did, and it’s almost like the next step. There are miracles, but it’s like when the Americans won in Lake Placid, everybody called it the miracle. Well, Slovenia won two games. If they’d have knocked Sweden off, if they could’ve beat Sweden, that’s about as good as you could get. It put it in a better light how small Slovenia is. I don’t know what the number is, but how many kids or people actually play ice hockey there. And they’re represented in the Winter Olympics. [Reporter: It says something about the coach, too.] It says something about the program. Kopi left his country when he was a boy to play hockey.

On where he’ll watch the United States-Canada semifinal:
We’re going to watch. We changed our ice time so the guys can watch the game. I don’t know if I’ll either watch it at home or here. I’m disappointed – like the girls today – I’m disappointed it’s not for the gold medal…It’s a flip of the coin. Goaltending, penalty, bad bounce…there won’t be any surprises in it, that’s for sure.