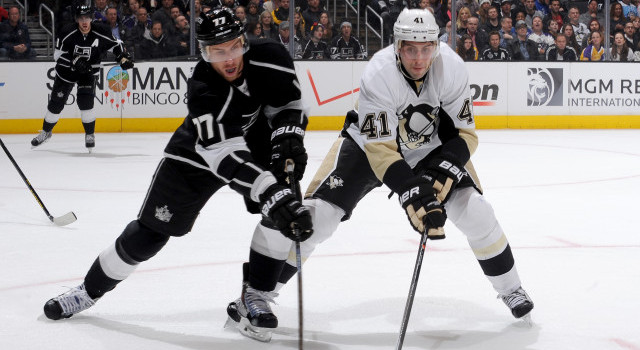 On the loss:
I think they scored in the first minute. We battled back from that, and Kopi scores a big power play goal and then they got the five-on-three. Kind of a phantom call on Brown. One guy called hooking on Jarret, which was a penalty on Malkin, and then the penalty on Brown at the same time. You need a big save in there on the five on three against that power play and that team. They score there, and then the next power play goal was a bad goal on our part, and it takes some wind out of you.

On whether Evgeni Malkin’s goal came from a breakdown down low:
It’s a faceoff goal. There’s a switch there. Because of where Malkin goes on the draw, Willie and Kopi have got to make the switch. They didn’t make it all the way.

On scoring three goals in the last five games:
I only base it on tonight. We scored one tonight. You can’t beat Pittsburgh scoring one goal. It’s not just about scoring goals in this game. [Reporter: But during the stretch, what are your thoughts on how you’re doing as far as getting the chances?] What stretch? [Reporter: The last five games.] We won in San Jose. It was a tough, tough game, We won that game. And then we didn’t score at Phoenix, so we lost. And tonight we only scored one. So I don’t look at what the last five games had anything to do with tonight.

Whether any of the first three goals were “on” Jonathan Quick:
You know what? Hey, I probably should’ve made the change after the third goal. And that’s not putting anything on Jonathan, but I probably should’ve made the change there. I mean, they scored three goals on what, five or six shots? That’s not always one guy, right? [Reporter: In the middle of the period, as opposed to-] Hey, I’m not a big guy in changing goalies. That’s not something historically that I’ve done.

On coaching against his nephew, Brandon:
He’s a good player. I’ve seen him basically his whole life and my whole life. I spent some time with him yesterday. It was good. That’s the only thing you get to do in this league in terms of family. One thing that gets thrown off the side as a coach is families, always.

On a quick turnaround with a Saturday matinee:
Yep. That’s what I told the guys. You know what? You play right away again. You’ve got to reset it again.