Former Kings defenseman Rob Scuderi took the Toyota Sports Center ice with the Pittsburgh Penguins shortly after 2:00 Wednesday afternoon, and as one reporter noticed, was the subject of attention when Sidney Crosby pointed up towards a wall-hung banner depicting the Kings huddled around the Stanley Cup in the midst of their June 11, 2012 celebration.

“I think they were asking me why I wasn’t a little closer to the Cup,” Scuderi joked. “I’m more of a back row guy. So, I was kind of tucked away in the back. I was still in there.”

Having won a Stanley Cup with the Kings amidst a collection of 50 playoff games, Scuderi was a member of a Los Angeles team that enjoyed its greatest success while he was an integral part of its blue line. Though his statistics depict very little of his overall impact, Scuderi appeared in 285 regular season games with the Kings, totaling four goals and 47 points.

“This was home for four years. I feel very comfortable here. I know I’m part of a different team, but it’s still a comfortable feeling and a place I spent a lot of time.”

Citing his family’s needs as the reason he returned to Pittsburgh – Scuderi is a native of Syosset, New York – the defenseman who now wears number four discussed the impact distance had on his decision to return to Pittsburgh.

“My family came out for a couple games right at the start of the season. They came out for Christmas, and certainly with the schedule we play, we play a heavy east coast schedule, so they’re much closer, and they can catch a lot of games, whether it be the Islanders, Rangers, Devils, Flyers, I mean you name it, they’re not too far,” Scuderi said. “Like I said, being honest, when I gave my interviews when I made my decision, I was torn to leave here. When I first came out, it feels a little bit awkward, and then after four years, it’s home. It’s tough to leave a place where everyone has treated you very well.”

On Los Angeles’ failure to re-sign him:
You know what? That didn’t really matter to me. All that mattered to me was that they tried, and that they genuinely had me in their thoughts for the future, and that’s all that mattered to be. Again, when I came down to it, it’s not that I didn’t enjoy the area or enjoy playing for this team, but Pittsburgh is closer than Los Angeles as far as…family, and where I’m at at my stage of my career, it leaned a little more heavily on me.

On whether it was strange walking back into Toyota Sports Center:
Yeah, I went to park in my normal spot, and someone was in it. It was kind of weird. Well, oit was tough to pull the bus in there, anyway. Like I said, it’s a place where I felt very comfortable over the last four years, so it’s a nice feeling comeing back. We had a great four years here. I did. A sStanley Cup championship, a conference finals, a very successful four years.

On Sidney Crosby referencing the Stanley Cup photo:
Yeah – like I said, I have nothing but good memories from here. It’s something I’ll always carry with those guys, and something we’ll always remember together.

On playing with Crosby again:
I think he’s just had some maturity as kind of seeing things for himself off the ice, and I think that will help him a lot as a player and as a person. He’s always been great at both, but I think it’s just something that you see with maturity. As a player, he’s also grown. It’s scary to think that he’s gotten better, but he has. The decisions he makes, in and out, on different areas on the ice, are better than when I played with last, which is a scary thing to think of.

Whether the return to Los Angeles has been on his mind:
It’s not like I think about it. I don’t come back with bitter feelings or feelings of regret or feelings that we didn’t accomplish something that we wanted to. So it’s more of good memories and good friends that I’ve had here. I’m on a different team now, but the memories you get to take with you.

On the feeling of opposing former defensive partners Drew Doughty and Slava Voynov:
It should be fun. You kind of see those guys before warmups and maybe you have a little smile or a little inside joke or something. But besides that, once the game starts, you see the games in the colors of the jerseys, and certainly I’ll be playing for mine.

On Drew Doughty’s reference that he knows his weakness:
Probably ice cream, I guess. That’s probably my weakness.

On his return from a fractured ankle:
It’s been good. Certainly I think it’s the longest amount of time I missed, and there’s a bit that needs to get back – your timing and things of that nature. But after four or five games you start to feel pretty good and you feel like more of yourself. Since then I think I’ve gotten back to my normal game.

On whether he returned to his former house in Pittsburgh:
No, we had sold a house there, so we went back and found something different. Like I said, it’s a great area, a lot of great suburbs. Besides the weather difference right now, they’re both great places to live.

On how old his kids are:
My kids are eight, six and two. They’re a little older, but we had a great set-up here [too]. It was not an easy decision. 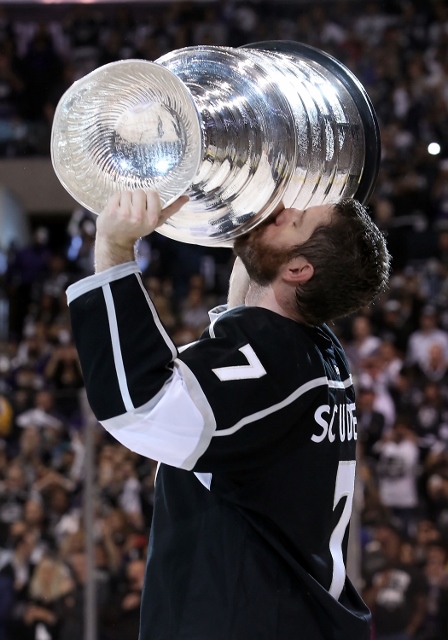 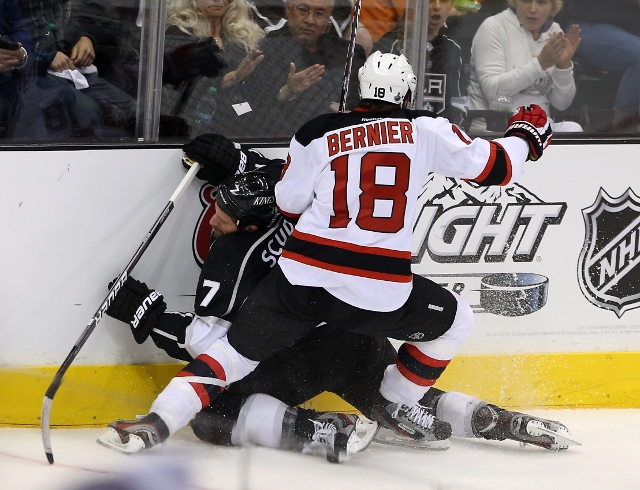