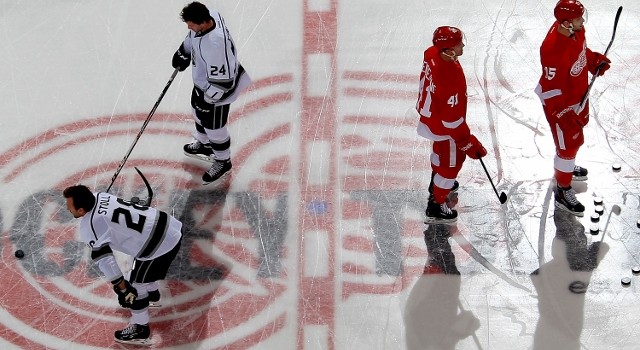 On whether he had ever seen anything similar to Niklas Kronwall’s goal:
Pucks go in the stands, and then they come back in and score? Probably, yeah. Off the net? We’ve seen that. That’s embarrassing for the league. That’s what that is. It doesn’t matter if we’d have scored, or if they had scored it. That’s embarrassing.

On being so close to a victory:
Yeah, that’s what I told our [players.] You know what? We got screwed. Right? It’s one-one going into the third. You know what? It’s like friggin’ tough rinks. We scored a power play goal late. They could see the puck when Dwight King covered it with his hand, but they couldn’t see it when it went over the barn and came back in. Hell, just think – if there wasn’t a net there, they could’ve caught it, thrown it back in, scored, and they still had time, and nobody would’ve seen it. What are you going to do at the outdoor game? What happens if it goes through a cumulus cloud and comes back down?…Like, what are they going to say? [Reporter: Is the beach volleyball court out of bounds?] That’s just embarrassing. That’s embarrassing. It shouldn’t even be that.

On what type of response he wants from his team:
Oh yeah, we’re going to play bad the next game for sure because they scored that goal. You haven’t been around us enough to know that.

On whether he saw Kronwall’s goal well “live” and “in speed”:
I’d seen it live and in tech- yeah, I was right on the bench, same speed as you. Did you see it live?…Just put it this way. If one of the best players in the league, Drew Doughty, can see it – [Reporter: The reason I ask is because Kopitar said he actually didn’t see it hit the net. So I was just curious-] What difference does that make? It doesn’t matter if they scored it or we scored it. It’s friggin’ embarrassing…What’s the flag? Throw the flag? [Reporters: The challenge flag.] Throw the challenge flag, yeah.