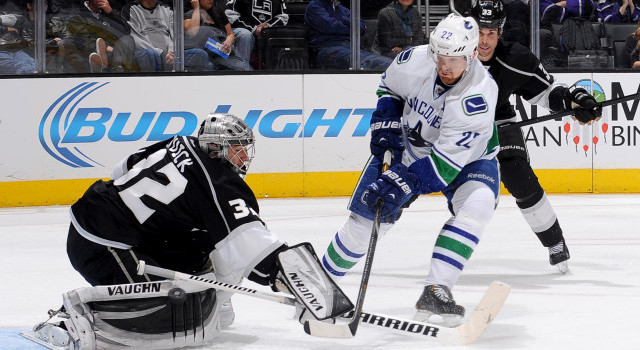 Henrik Sedin, on delivering a message throughout the game:
We played a great game. I think it was up there with our best games of the year, if you look at the way we were batting, hitting and getting in on the forecheck and everything you need to do to win games. We were right there.

Henrik Sedin, on being called for a penalty his brother committed:
Yeah, I like that though – fantasy points.

Henrik Sedin, on killing the penalties in the first period:
We didn’t really care about that today. We went out there, we did everything we could to stand up for each other, for our goalie and like I said, for our teammates. We’ll kill off those any day.

Kevin Bieksa, on the game:
It was a good game. Shots were on our side, even though we gave them probably 15 minutes of power play time. It was one of the most positive losses I think.

Bieksa, on if it stung that Dustin Brown scored the game-winning goal:
I didn’t see who got the goal. [Reporter: Brown] I could care less who gets their goal. I didn’t see the goal, but we had our chances at the end. Quick made some big saves and couldn’t get a goal. It was a good game though. We played well, played hard. A lot of guys stepped up, like I said.

Bieksa, on Los Angeles’ early power plays:
We were okay with that. We were going to come out and play hard and play Brown hard and play some of their other guys hard and we did it. I have no problems killing off the penalty when Kassian is doing his job out there. No problems killing off the penalty when Tom does his job out there. I think we’ll kill those off most of the time. If not, so be it. They hockey gods are on their side. If anything it galvanizes us.

Bieksa, on setting the tone early:
For us it was coming out and we were going to make a statement whether they liked it or not. So after the first period or so, a lot of their guys were skating around saying ‘what’s up with you guys tonight.’ So we obviously got their attention and we’d like to play like this every night.

Kesler, on his fight with Dustin Brown:
I think that everything that happened with Roberto the last time we played, I think he knew from the opening puck drop that he had to fight someone. I think – a lot of guys sticking up for each other tonight. It was a good team game tonight.

Kesler, on the impact of this game:
You always want to win the game. But I think not getting a point, or even two points – it’s what we play the game for. But saying that, this game is going to go a long way for our team in the future – the way we played tonight is the way we need to play every night. I thought we were good tonight.

Kesler, on if his fight with Dustin Brown will impact their relationship as teammates at the Olympics:
Not awkward at all. I know him off the ice, he’s a good guy. But right now, on the ice, he’s the enemy. He plays the game hard. I play the game hard and saying that, we’re friends off the ice.

John Tortorella, on the game:
I thought, in all parts of our game, I thought we played well. We don’t capitalize on a couple offensive chances, we make a mistake early in the third and they score. There were a lot of things that I thought we stepped out of into a different level, which is really important as you go to the second half of the year.

Tortorella, on killing the penalties in the first period:
It is what it is. We did our job.

Tortorella, on making a statement in the game:
I thought we did a really good job as far as deciding that, that ice is ours also. It’s something that’s been minus in our game a little bit here. That was a big part of our game tonight. We had squat for points, but I think we crossed a couple of bridges in what needs to be done.