Greene understands the circumstances of not playing 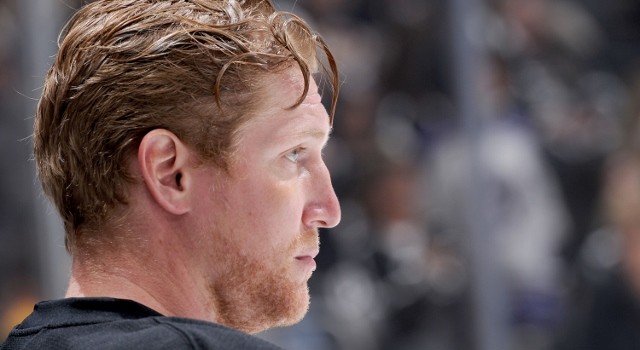 You would imagine it would be difficult for Matt Greene, an alternate captain and six-year veteran of the Los Angeles Kings, to watch the last three games from upstairs. In speaking with reporters after practice on Friday, the levelheaded defenseman showed no signs of mental strain and commended his teammates for stringing together solid performances in his absence.

Greene, who last played in the 5-0 loss at St. Louis on January 2 and participated in all five losses during the team’s recent losing streak, has watched as the Kings have returned home to claim five of a possible six points through the first three games of the five-game homestand. Alec Martinez, one of Greene’s frequent defensive partners, scored the game-winning goal on Thursday and appeared to solidify his spot in the lineup with three strong games while stepping in for Greene as the team’s sixth defenseman.

Greene was assessed a high sticking double minor in the offensive zone early in the St. Louis game, which led to a Blues power play goal. Darryl Sutter was critical of the play, and while a casual glance at the moment might offer a kneejerk reaction that Greene’s removal from the lineup constitutes a punitive measure, in reality, Martinez has been providing the type of quality minutes that would make it difficult to replace him.

“Marty has been awesome all year. It’s not just this home stand, it’s been all year. He’s been great,” Greene said. “He’s been coming over and playing his off side, it’s not easy to do. He’s done a really seamless transition and I’m happy for him. I think everybody’s happy for him. He’s doing a lot of really good things and he’s showing the player that he is. It’s awesome. It’s awesome to see him get success.”

Following an optional practice at the Toyota Sports Center on Friday, both Greene and Sutter spoke of the circumstances that have kept the 30-year-old out of the lineup for the last three games.

Greene, on not playing in the last three games:
You always want to play, but we’re winning games right now and we’re having success and that’s all that I can ask for. First and foremost, I’m part of this team and I want to do is see it win, see it succeed and we’re doing that right now. So it’s good times.

Greene, on the challenges of sitting out since the St. Louis game:
If you’re not playing, then you’re obviously not doing something right. So I have to get my game back and going. I’m going to get another chance, it’s a long season. And you hope you just take advantage when you get that chance.

Greene, on if he has been talking with the coaches:
Yeah, open line of communication. [Reporter: Anything you can tell us about that?] No, I think that’s between me and them and that’s it. Guys that are in the lineup are there for a reason. They’re winning games and they’re playing well.

Greene, on the team’s even demeanor regardless of the circumstances:
Guys have been around for a while now. We’ve got a good group here. You’ve got a lot of interchangeable parts and you have to have confidence in your group and confidence in yourself. We’re a good team, we know we are. We can get through slumps together and guys can lean on each other to get through individual and team slumps. We try not to get too high and not to get too low.

Darryl Sutter, on whether he anticipates getting Greene into the lineup soon:
No. Based on performance. I’m not into ‘what you did.’ I’m into ‘what you’re doing.’ [Reporter: How much is it based on performance, and how much of it is just putting out the six players that give you the best chance to win on that particular night?] We went on a trip and didn’t have much to show for it when we came home, and Greene played every game. So at the end of the day, when you make changes, you make changes generally in your sixth defenseman and your fourth line. So last night the game before, he was the sixth defenseman, and he went out. Last night, Jordan Nolan went out. That’s a fact. That’s what good coaches do, and that’s what good teams do, and that’s too bad. I’m not into feeling sorry for guys ‘cause they’ve been around a long time. I’m in to how they play. Very simple. Either they accept it, or they don’t. [Reporter: Does it seem like he’s accepting it?] He better. He better have a good attitude, very simple. The only thing I don’t accept is anybody with a bad attitude in terms of work ethic, attitude, or how they’re received by their teammates. It’s why we’re a good team. It’s a change that we’ve had to make, obviously, in the last three years here.