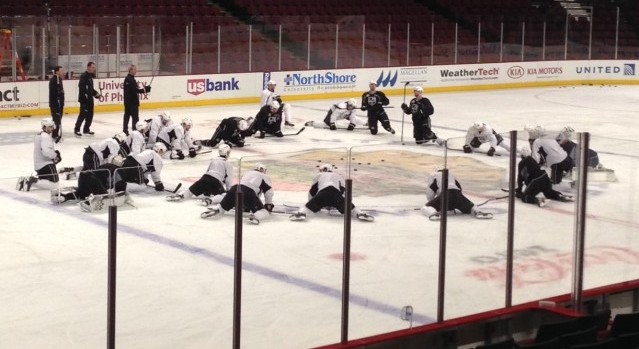 Asked if the team was “leaning towards” utilizing seven defensemen for the second consecutive game, Darryl Sutter offered a pithy response.

Seven defensemen dressed in the 3-2 loss to Nashville Saturday night, though there were varying degrees of usage.

Folowing the Kings’ morning skate on Monday at the United Center, Sutter explained the process of how seven defensemen are used.

“On the road it’s difficult. Five-on-five, that’s difficult,” he said. “What you’re doing, is you’ve got three or four guys that are supposed to be good penalty killers, and you’ve got two guys that are supposed to be good power play guys, so we just tried to use them more in that situation, and in that game, there wasn’t much. So, did it work? It didn’t. We lost.”

Of course, 10 days ago Sutter downplayed the idea of using seven defensemen, so don’t think of the projection of seven defensemen as a firm lock. If he does decide to go with six defensemen, Martinez would be the player to leave the lineup, based on his 10 minutes and 26 seconds of ice time in Saturday’s loss.

In other lineup news, Mike Richards and Jarret Stoll changed places, so tonight’s lineup could look something like this:

If the Kings do return to six defensemen, Colin Fraser would center Clifford and Nolan, as indicated by this morning’s line rushes.