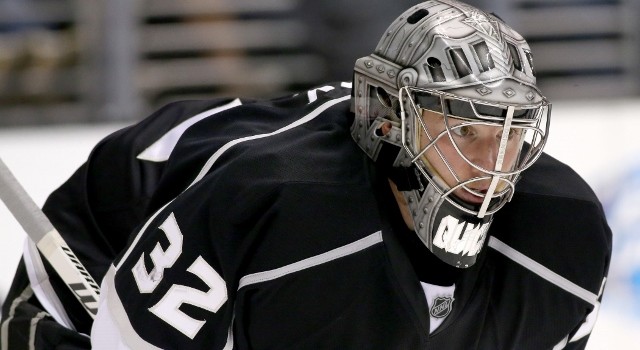 It was a relatively quiet morning on the ice at the Toyota Sports Center on Sunday, as Willie Mitchell, Matt Frattin, Daniel Carcillo and the team’s three goaltenders took the ice for a practice that saw Martin Jones depart after roughly 15 minutes.

Though Jones and Ben Scrivens saw a handful of shots Sunday morning, it was Jonathan Quick that received the majority of the work in the crease. The former Conn Smythe Trophy winner, sidelined since suffering a Grade 2 groin strain in overtime of a 3-2 loss in Buffalo on November 12, faced off in multiple one-on-one drills against Mitchell, Frattin and Carcillo and showed improved mobility when compared to earlier skates.

These were practice drills, however, and there is still a ways to go before Quick is tasked with reacting to the structured chaos of live game action.

“I haven’t been experiencing the soreness nearly as much as I was, say, a week ago,” he said. “Like you said, it is practice, and you know what the drill is, and you know what you have to do each play, so it’s not a situation where you’re completely in reaction mode and don’t know what’s going to happen. Quite frankly, I could do these drills for another two months and you could feel a hundred percent, and it’s still not the same as playing in games.”

No timetable has been set for his return, and Darryl Sutter didn’t express any profound optimism when asked Wednesday if there would be a chance for Quick to join the team on the post-Christmas road trip that begins in Nashville on December 28.

Until then, Quick said it’s the “same thing” in terms of his recovery process.

“The past week, every day you feel a little bit better. I just continue to challenge it, work on things, and try to get [my] game in order. You try to do everything can do to get to a hundred percent,” he said.

Quick, on his level of endurance in the rehab process:
Every day you kind of push it a little more and more. It’s almost at the point where you’re looking for the pain. You’re trying to find it. It’s a good sign when you’re trying to look for it and you’re not getting it, you know? Obviously there’s still a lot of work to do, but everything’s been going in the right direction. We’ve just got to keep going here. There’s a lot of work still to be done.

Quick, on the quality play by Ben Scrivens and Martin Jones’ in his absence:
I knew that when I first went down, before either of ‘em played a game when I was injured. Obviously Scrivs and Jonesy are great goalies, and are going to give the team a chance to win every night. Not only are they giving the team a chance to win, but they’re just winning. It’s great. It’s great to see that. At the same time, you get that itch, and you want to get out there, and you want to play games.