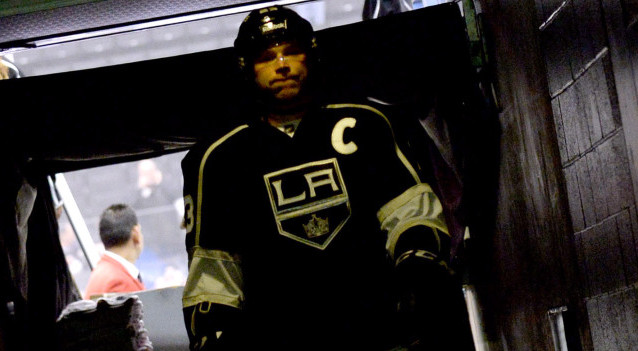 From the Kings’ standpoint, the Dustin Brown-Tomas Hertl story isn’t likely to blow up on this Friday afternoon, as video replays have shown that Brown attempted to avoid a collision at the last moment before his rear leg made contact with the right knee of the 20-year-old forward.

There was ominous news out of San Jose, however, as Kevin Kurz of CSNBayArea.com reported that the Czech rookie “will miss at least one month with a right knee injury, and possibly much longer,” as learned in a conversation with a team source. Hertl underwent an MRI on Friday, though the results are not yet known.

On Friday, Brown met with reporters at the Kings practice facility in El Segundo to describe his recollection of the collision.

On whether a game misconduct was the “right call” or the “wrong call”:
I think it’s wrong. I understand why they call it. It happens really fast. The refs don’t have the benefit of watching a replay, but I think the replay clearly shows me trying to avoid. It’s one of those where we’re kind of on the same tracks and deciding which way to go. I mean, it happens quick on the ice, but the replay shows I’m trying to get out of the way.

On whether the collision was similar to the one between him and Logan Couture in last year’s playoffs:
I remember that one was right in front of our bench in San Jose. Guys turn certain ways, and they get on the same path. I mean, it was similar to that one. That one was more [that] we didn’t see each other until it happened. This one was kind of like deer in the headlights, more like we kind of saw each other.

On what the referees had said to him following the hit:
I didn’t really talk. The refs wouldn’t really say anything.

On the challenges faced by the referees:
There’s 10 guys, 12 guys, 14 guys with the refs skating on the ice. Stuff happens, and that was one of those plays where he had it on his stick for a split second, and I kind of made my angle towards him and realized I wasn’t going to be able to make a play on the puck or make a legal hit, so I tried to avoid him. Like I said, it’s one of those things that just happens in the game – collisions. Random collisions.

On the collision:
Like I said, I can understand if my knee changed positions, if my leg changed positions, if I was leaning into him. But, in my opinion, the video clearly shows me trying to avoid collision. My leg is just as much at risk as his leg in a collision like that. If I have weight on my right leg, and then I’m sturdy on that leg and leaning in this way, maybe it’s different. Like I said, I’m just as much at risk in that play as he is.

On his state of mind after receiving the game misconduct:
I was in the locker room just trying to cool down. When you have a play like that happen, my first thought was I was trying to get out of the way, trying to avoid contact. It was just a collision, and you don’t know until you see video because sometimes you feel like you’re doing something and you’re not, and may in the back when I got kicked out, I’m thinking ‘Maybe I stuck out my knee. I don’t know.’ But that’s not what I felt when getting off the ice, and I saw the replay. It’s pretty frustrating when you see the replay. But then they come out and kill the penalty, and Marty finds the back of the net, and it kind of becomes a moot point, I guess. The whole scenario could have been a lot different with a three-minute power play. They could have scored three goals, who knows. It became a non-issue

On his activities for the remainder of the game:
Because it was only one period, I don’t know how much ice time I got in the first. But I got on the bike and did some sprints just to get something done.

On whether the team’s current level of play compares to that during the Stanley Cup run:
It’s really hard to compare that type of hockey to this type of hockey. Just to go like we did that year at that time of year is a whole another story, I think. It’s just a whole another level of intensity and how much harder it is at that time of year. I think we’ve played really well. We struggled in the beginning. I don’t know where we were hovering – like right around .500. Six-and-five, or whatever we were for a while, and then we kind of turned the corner…We’ve been able to string wins together. A lot of it is we’re finding different ways to win, whether it’s a one-nothing shutout in New York. When you’re not playing well, good teams find ways to win, and I thought last night, we had a really good time last night, just from watching it. We had a lot of guys going. It helps when you start to see Kinger and some of those guys come into their own and feel more comfortable at this level.