Darryl Sutter has some big ideas for the penalty box 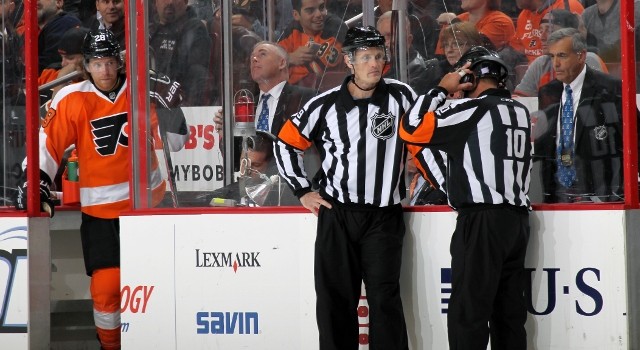 If you’re looking for news from the Kings practice – that information will come later today. In short, Jonathan Quick took shots from his teammates, though there still remains no firm timetable for his return, and it’s too early to gauge whether he’ll travel on the road trip that immediately follows the Christmas break. The schedule has been tough on the team, and Darryl Sutter shared some thoughts on how it impacts the preparation of tomorrow’s game against San Jose. Updates of substance will come in Darryl’s full quote sheet this afternoon.

In the wake of hits by Kyle Quincey and Tom Wilson last night, and with the events of the December 7 Boston-Pittsburgh game continuing to draw attention, Sutter was asked about his views on the increased about of supplemental discipline applied by the league in response to “bad hits” seeming to take place “every night,” as it was referenced by a reporter.

Though Sutter argued that there aren’t, in fact, bad hits “every night,” – those quotes will be posted later today – he did spend some time opining about what he views as the penalty box’s reduced place in the modern game.

To begin, he referenced the discipline of his own team, saying that “a perfect player can be a physical player, but he should have zero penalty minutes. That’s the way the game is now. You don’t have to be looked on as a guy who sits in that little box over there.”

The conversation then got interesting.

“Still, it amazes me that’s what they call it – the penalty box. Like, what is that, the ‘penalty box?’ They should take the penalty box out, because you think about how much time there actually is sitting in the penalty box now, it’s about 12 minutes total a game, right? 12 minutes. It used to be they had a guy with a suit, and if you got a penalty, and you got a penalty, that guy sat between you, right? Now they have two boxes. You go to the box. It’s like Steve McQueen, right? They should sell those seats…there are so few penalties now. Why don’t they just say, ‘OK, you’ve got to sit on the bench,’ or, ‘You’ve got to sit on their bench for two minutes.’ I don’t get that. They’ve got like four guys sitting over there, and room for like six other people to sit. They’re the best seats in the house, right at center ice. Like, if it was a football game, then that’s the best seat. I don’t get that [any] more. Really, it’s like a three-penalty-team a game now. Why do they make that deal? Why do they get that big place for there? When I was coaching Brett in novice when he was little back home, and he’d get penalties, I’d go, ‘Brett, you’re little. Why do you go over there and sit? Why do you want to go there?’ He says, ‘I can see better from there.’ [Reporter: How old was he?] He was just little. It makes sense, right? He could see better.”

“When you think about it, I’m probably right for once.”