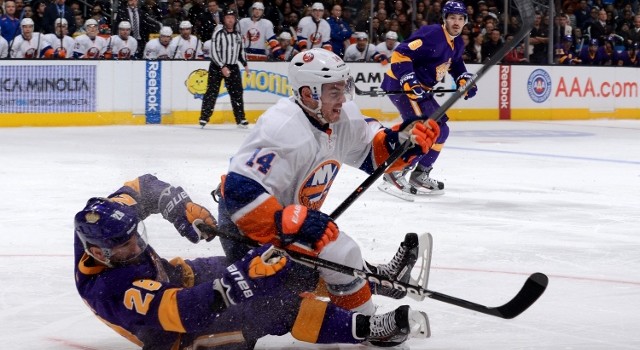 On who will start in net in the first game of the road trip:
Whoever comes in and says they’re going to play. Wants to play.

On who is playing better, the goalies, or the players in front of the goalies:
I don’t think you win with one guy, that’s for sure.

On whether Williams is the key to Brown and Stoll’s production:
No, Brown and Willie…all they did was switch centermen – Stoll and Kopi. It wasn’t [anything] to do with Willie going there.

On whether any combinations have stood out over the last two games:
Well, the last game we played was three-in-four, so you needed a lot of guys. Tonight you had to shorten it up because of how much they play two dominant lines over there.

On Scrivens coming out for the warm-up, but Jones drawing the start:
That’s what happened. [Reporter: That’s not usually how it goes, though.] Not usually, no. [Reporter: You trying to pull a fast one on us?] No. I’m not. But I don’t really have to clarify it, either.

On whether Jones is making it a “tough decision” to decide who starts in goal:
It was supposed to be the other guy’s start. [Reporter: What prompted the change?] I just said I don’t have to clarify that.

On whether he could elaborate on previous references to things “slipping into” Ben Scrivens’ game:
No. That’s all you want to talk about, is goalies. We just won three-nothing. I would think you would talk about the goalie that played tonight, not the goalie who didn’t. That’s what I would talk about. For sure, that’d be a good story. Jeez. ‘So, Darryl, how do you think Martin Jones played today?’ ‘I thought he was really solid. Made some big saves for us. Jeez. Really held us in there in the first period. I thought he was outstanding.’

On whether Jones’ first two games in the NHL “could have gone any better”:
The first one, you would’ve preferred not to go to a shootout. Regulation, division.

On whether he was happy with the movement on the power play:
Other than the last 1.1 second power play, I was ecstatic.

On whether he pays much attention to the McFlurry Minute:
No. What is that? [If the Kings score within the last minute of the second period, then everybody gets a McDonalds McFlurry.] That’s a good thing, I guess. A free dessert. I’d rather have lemon meringue pie, myself.