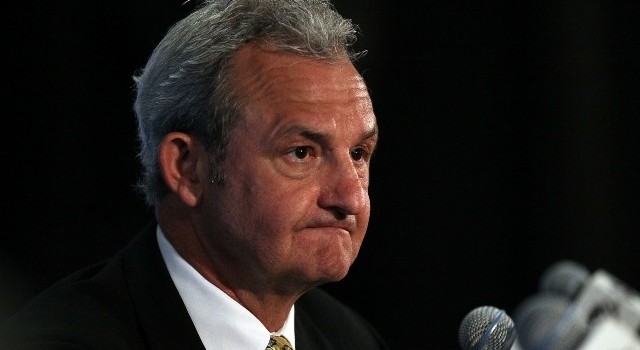 On whether he’s happy with the team at the Thanksgiving evaluation point:
I don’t go by U.S. Thanksgiving because the season started this year a week earlier. So if you look at it, when you break it all out, I don’t look at it as 82. I look at it as 80, I look at it when you get to 20, I look at it when you get to 40. This year, 41 is actually the calendar year, which if you base it on 82, that’s half a year. You know what? Tomorrow’s 30 games. If we had 40 points, you’d double 60, that’s 80. That means after 60 you’ve got 80. What you get in the last 22? You need a hundred to make the playoffs. There’s no way around it. You know what? .600 hockey – it’s not so much winning. It’s the actual points that you accumulate. If it comes just to wins or regulation wins, then there are a lot of ties. And that could happen, but so what? What’s more important is just the process of how you accumulate, and the schedule dictates a lot of it. It doesn’t matter who you’re playing. All you’re looking for is really good work, because you’re not going to be perfect. If you’re perfect, then there would be three or four teams that never lose. It’s just sort of the way it’s set up.

On whether Jake Muzzin is progressing:
Hey, I’ve asked him to be a better player for us, a more consistent player. First off, that left side with Willie and Robyn, you know what youre going to get out of Willie and Robyn. Steady Eddie, for the most part. We cut [Willie’s] minutes back to probably bring that more into it, so he’s a little bit more consistent in it. Robyn gives you pretty much those 20 hard minutes the same way every night. So you know what you’re getting. They’re maximizing their skill set. So a guy like Muzz? Maximize your skill set. From a straight skill set in terms of skating, shooting, those things? He should be ahead of those guys. And from an age standpoint, he should be ahead of those guys. From an energy standpoint, because of his age, he should be ahead of those guys. There’s lots of things that go into it. So am I happy with Muzz? Can he be a lot better? That’s not being hard. Damn rights he can. He plays with Drew Doughty, I put him on the power play a lot, I’ve tried to keep him away from penalty killing, which protects young players. Things like that. So can he be better? Yeah. In five years he better be a hell of a lot better. [Reporter: I think you said earlier in the year after a game that he was “carrying Drew’s bags.”] Well, he didn’t play for a number of games. So that wasn’t because I don’t like Jake Muzzin, that was because we were trying to win hockey games. [Reporter: I don’t think it was because you didn’t like him. I think it was more just an evaluation of his performance. I’m just wondering if that’s something you’re not feeling these days.] He’s evaluated every game. Quite honest, when we went into Anaheim the other day, the last time that Jake had played in Anaheim – so don’t think I didn’t talk to him about it, because you’re evaluated on the last game…We’re not that far removed from Jake Muzzin being a healthy scratch. We’re not that far removed. [Reporter: I know. That’s why I asked the question.] He’s a young guy. You’re looking for consistency. When we haven’t played well that year, it’s very seldom a team thing. It hasn’t been at all. It’s been an individual thing. It might be top two or three guys, it might be a goalie, but also it might be seven or eight young guys that are figuring out the process of being focused on the game day. It’s something that’s overlooked with our hockey club. All these teams come in and say they’re young teams. Well, when you do it on paper, actually, we’re younger. But our younger guys are experienced at playoff time. All those guys don’t have playoff experience. Our guys do.

On whether it was important for Martin Jones to be with the team in the playoffs:
I think it was the last two years it was important. It’s the very same thing – remember when we brought Tyler up last year and said he was way better watching? Because he can watch guys that are a little bit older, not much. Young guys that understand what game day is better than most others, and that was good for him. When we sent Tanner back – Tanner got a little snapshot of the playoffs last year, because quite honest the position was not performing for us. So we played him six or seven minutes at left wing, and that was enough. But he still got to see it all, and then this year he had seen that his training wasn’t where it had to be, and then he had a good summer of training, and then he had a good training camp. At the end of the day the numbers wouldn’t allow him to stay here, and then when he came back up he was good for two or three games, and then it really dropped off. So it’s all part of the [Reporter: Process?] Yeah.

On whether he has any update on Jonathan Quick’s status:
No. He just walked past us. There’s no timetable.