Greene, Lewis progressing; no timetable yet 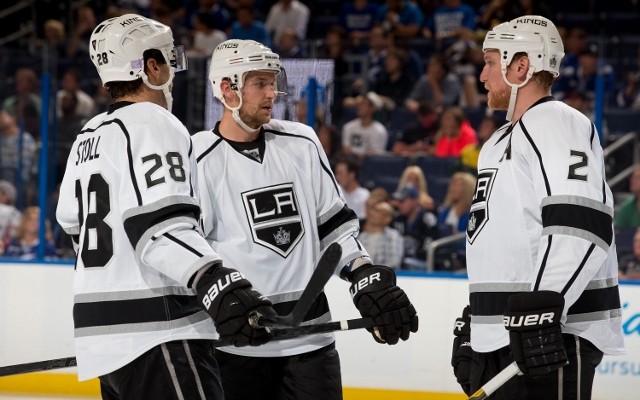 The Kings returned to the ice for a non-contact skate after a recovery day on Wednesday, which allowed injured reserve-designated players Matt Greene and Trevor Lewis to participate fully in practice.

The players are getting closer to returning, though there still isn’t any timetable on their returns. Greene has missed the last 14 games while rehabilitating an upper-body injury and is on long term injured reserve, while Lewis has missed six games due to a lower body injury.

“Greener started with the group, and I asked Lewie this morning if he wanted to skate,” Darryl Sutter said. “It was because there wouldn’t be contact, rather than doing the same thing out there himself. Obviously it’s not them, per se, it’s when we’re going to have a roster issue, and obviously a cap issue, and we go on a trip. We go east, so obviously all these guys aren’t going to be here.”

Sutter indicated that not everybody will travel east when the team opens up a four-game road trip in Montreal on Tuesday.

“Get through Saturday,” he said. “Just the way it sets up, I wouldn’t want to do that from a coaching standpoint. It’s a back-to-back, then two days, then back-to-back.”

Greene has two goals, three points and a plus-5 rating in 15 games, while Lewis has been held without a point and is a minus-4 in 23 games.

Darryl Sutter, on whether welcoming injured players back to practice gives the team a noticeable lift:
“No. I think with this group, because it’s a young group, pretty much every night you’re playing with a younger team than you’re playing against. So I think what I’ve noticed more with our group, is when we called those kids up, it put a little competition into our locker room. For some of our more veteran guys, they could put a little pressure on ‘em.”

Matt Greene, on how he feels after additional practices:
I feel good now. You can’t really replicate skating, so the first couple days are always tough after you take some time off. It’s good, though…The coaches get out there and really pound you those first couple days. It’s the only way to get your legs underneath you. It’s no fun doing it, but it’s necessary

Greene, on whether he faces any ill effects due to the injury:
Just trying to get healthy, man. That’s it.

Greene, on Martin Jones:
Jonesy played great. He’s really calm in net, really smooth, too. I shouldn’t be giving goaltending critiques because I really don’t look at either side, but he looked really good. It’s really special for a guy to get his first win up here, especially against a big rival, and the way he did it in the shootout with some big name guys shooting against him. So it’s fun to watch, a big accomplishment for him, and everybody’s happy for him. [Reporter: Perry, Getzlaf and Teemu. Jeez, just a murderer’s row there.] Yeah, pretty cool. He can tell his buddies about that one.

Lewis, on conditioning while rehabbing injury:
That’s one part you’ve got to get back. Definitely there’s nothing else like skating. I’ve been skating skating kind of by myself for a while now, but it’s a whole different level when you get a little bodies in there, and trying to protect the pucks and stuff like that. I’m feeling better, but maybe I’ve got a little bit more to go here.

Lewis, on whether he could theoretically play on Saturday:
I don’t know. We’ve got a couple more days here, so we’ll see how it goes, and we’ll see what the trainers think, and stuff like that. Hopefully back pretty soon, though.

Lewis, on the pride of the Broncos going 2-0 against the Chiefs:
There’s a lot, but Alex Smith is a Utah boy. He played for Utah, so I don’t like to see that. But it’s awesome the Broncos won, though.