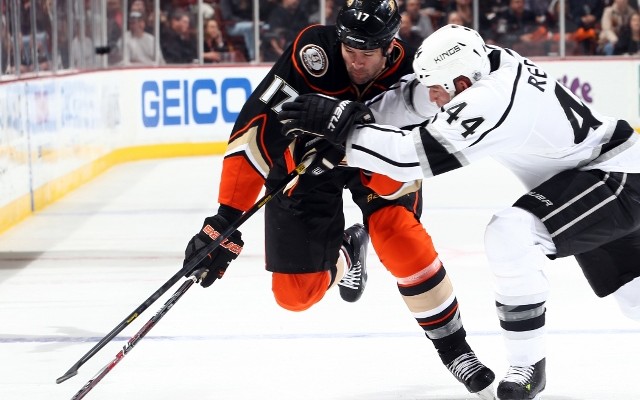 On a “pretty good rivalry game”:
Yep. It was a pretty good game to watch.

On whether there was a “playoff intensity” in the game:
No. [Reporter: Didn’t feel that, huh?] Not quite there yet.

On Martin Jones’ performance:
It’s good to see a kid in his first game get a win. Won it somehow.

On his decision to start Martin Jones:
Why not? Why not? I mean, the other guy’s not used to playing every game, and some things are slipping in a little bit.

On “the best thing he saw” from his team:
We’ve done this. How many games have we come back in the third period? Even the game we lost at home when the sky was falling, if you talk to Jon, they tied it up in the third period. Hey, it’s what we do. We’d like to score more goals. But we don’t let it deter us.

On the shots advantage, and how it “came into play”:
Well, ultimately didn’t come into play, because it came to a shootout. So the other team got one point out of it, and we got two. [Reporter: A little bit disappointing in that respect, though?] No. How can you be disappointed when you have 50 shots on goal? The last two games on the road in San Jose and Anaheim, the two best teams in this division, coming into both those games, how can you be disappointed? [Reporter: Well, you didn’t get one more than them, that’s how you can be disappointed.] I don’t really ride that emotional.

On the power play’s lack of production:
The power play was awesome tonight. They just didn’t score. Gave us some momentum again.

On Martin Jones’ poise:
I think he is a pretty poised guy, when you watch him. So hopefully this is something he can build on. The best part was the linesman brought the puck over. Best part. Good for him.

On showing poise in a nine-round shootout:
Well, generally, goaltenders are poised if you play in the NHL. It doesn’t mke him any different than anybody else. If you win a game in the NHL, generally you show some poise.

On whether Jones could draw another start considering there may be “a couple of weeks” before Quick returns:
We have no idea when Quick’s coming back.

On the penalties in overtime:
They were both penalties…Justin’s was a slashing penalty. Willie Mitchell’s is a broken penalty. Penner’s is a penalty. What was more confusing in it all was what was three-on-three, and when was it four-on-three, and when was it five-on-three, and then wait until the whistle ‘til it’s five-on-four. [Reporter: It almost felt like they were changing the rules on the fly there.] Well, quite honest, the reason everybody is talking about it is because everybody was trying to confirm with each other what it was. [Reporter: It all worked out well in the end though, right? Two points is two points.] It’s tough. We’re three-in-four nights. We played a fresh team in their building.