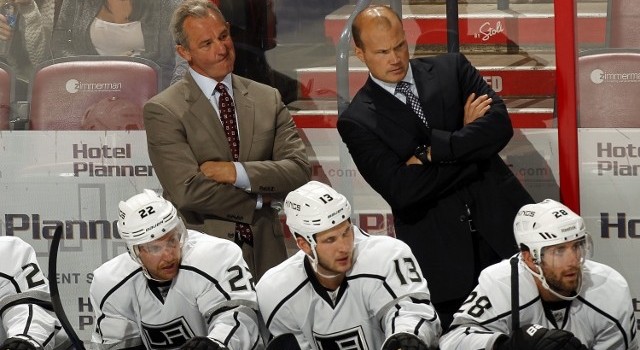 On his assessment of Linden Vey’s recent play:
He gives us some penalty killing minutes. What’s he doing well? He’s giving us about anywhere from eight to 11 minutes a game. If he can’t handle his minutes, then he’s not going to be playing here. That’s clear. I mean, a young guy’s got to play…Hey, if Tyler’s only playing seven or eight minutes, he’s not staying here. If Lindy’s only playing that, he’s not staying here. It’s not in their best interests. They’ve got an opportunity because of injuries. Clear. [Reporter: And they’ve taken advantage of it?] Hey, you know what? Tyler came up and was really good, and then he’s had a…drop, and then I thought he was better again last game. I think Linden has had trouble against certain players. He’s a guy that’s used to having the puck, and whatever level he was at – you know, I had seen him in junior, how dominant he was, and you can get away with stuff that you can’t get away with in the NHL. Simple. So he has to maximize his skill set, but at the same time not do it in a way that he’s losing ground or losing zone. [Reporter: How would you evaluate how he’s been on the penalty kill?] We got scored on last game when he was on the ice.

On whether he has any “contentious history” with John Tortorella:
No. [Reporter: Did that game come close to having that kind of fire? It just seemed really intense.] It wouldn’t serve much purpose for a coach to be hollering at another coach, because you can’t really do nothing about it, right? So I’m not really into that stuff. If you know me well enough…if I’ve got something to say, I can talk to the guy without 18,000 people seeing it. And that usually serves a good purpose. [Reporter: You won’t pull a Patrick Roy on Bruce Boudreau and push at the partition?] It just doesn’t help anything.

On the home ice advantage in the Los Angeles-San Jose series:
All the top teams in the league right now – whatever it is, the 25-to-30 game mark that we’re getting in to – are six-to-800-to-900 winning percentage, and you have to be a good home ice team. You do have a little advantage, always at home, because if you’re a good team, usually your top players are multi-task guys. So is there a little advantage at home? Sure, because I go, you go. [Reporter: Matchup issues, then, can make a difference?] Yeah.

On tonight’s game placing a team on top of the division:
That’s easy to talk about, right? IT’s about the schedule now, and the imbalance in the schedule, really clearly. Again, it goes back to the division…We play 26 or 29 division games. You can’t come up with the real numbers. Whoever wins tonight, fine. Somebody is going to win. Somebody is going to get two, somebody might get one, and somebody might get none. That’s the way it is. It’s either three-and-two, two-and-[three], or two-and-two. Right? That’s what the division is, and it’s not balanced it because of 16-14. You can’t come up with numbers. I mean, I know now the big thing is – I’ve said it before. They should just come to me first, right? Because I said, ‘You know what? It’s going to take at least 100 points to make the playoffs.’ So now, everybody’s like “Oh, there’s going to be eight teams…” I said that. Heck, that’s how good the teams are.”

On whether he has a plan for when Martin Jones will play:
No. Quite honest, Scrivens hasn’t had much work yet. He didn’t play much since May. [Reporter: Well, he…had a pretty good number of shots the other night.] Yeah, he did. But he didn’t play for two days….You’ve got to earn it in this league. This is a ‘earn-it’ league. It’s not a ‘who you are, what you are.’ You’ve got to earn it. That is, at the end of the day, what it’s about. [Reporter: I thought it was a three-two league, now it’s an earn-it league. It’s both.] Well, it is. I think three-two is earning it. Three-two is earning it. It’s not unique to us. It’s true. It’s unique to the National Hockey League.