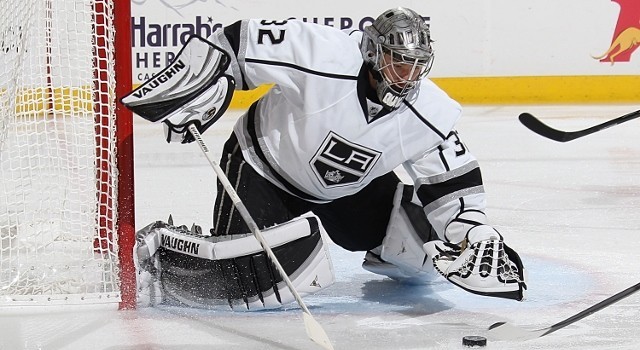 Per Darryl Sutter, Jonathan Quick underwent an MRI last night to determine the nature of the injury he suffered during overtime of Tuesday’s shootout loss to the Buffalo Sabres. The results confirmed that he has a grade two groin strain, an injury that has a wide range of recovery time and should sideline the former Conn Smythe Trophy for several weeks.

Groin strains are graded from one (least severe) to three (complete tear), and a grade two strain indicates there is some partial tearing. Though recovery time differs based on many factors, including whether the athlete has suffered a groin injury in the past – Quick’s TSN.ca page depicts an injury history free of groin issues – it is an injury that could sideline the goaltender for a ballpark of three-to-six weeks, as determined through various Internet reports and in consultation with a professional athletic trainer unaffiliated with the team.

While it is certainly better to have a Grade I strain (where pain is present but typically there is minimal loss of range of motion and strength) than either a Grade II (which would indicate more extensive tissue damage) or a Grade III (which would represent a complete tear and would be season-ending), there can still be significant variability among mild strains. The size and extent of injury, while minor overall, can still differ within this classification, with bigger ones being more problematic. Some strains will have more inflammation associated with them than others, which may project to more healing time. These variables influence the projected return to play time for an athlete.

Expected to receive the heavy share of the workload in net while Quick recovers, 27-year-old Ben Scrivens has appeared in five games, starting two, and has a record of 1-1-1 with a 1.89 goals against average, a .924 save percentage and a shutout.

“He’s…played really well for us off the bench, so we’re looking forward to seeing him,” Sutter said of Scrivens following the team’s morning skate at Nassau Veterans Memorial Coliseum Thursday morning.

23-year-old Martin Jones was recalled from AHL-Manchester yesterday and skated with the team this morning in advance of tonight’s game against the New York Islanders.