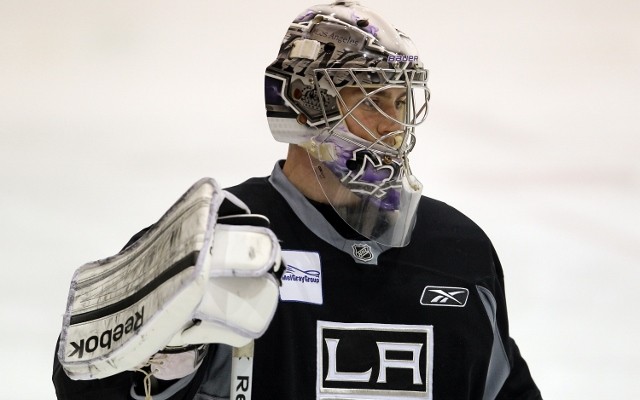 J.F. Berube received the start for the Manchester Monarchs in their morning game against the Norfolk Admirals, and combined with what appeared to be a lower-body injury suffered by Jonathan Quick in a 3-2 shootout loss to the Buffalo Sabres Tuesday night and the report by Lisa Dillman of the LA Times that the “planned course of action” was for Quick to return to Los Angeles to be evaluated, it appears to be a likely course of action at this point that Jones will join the Kings in New York prior to their games against the New York Islanders, New Jersey Devils and New York Rangers.

From the LA Times:

Kings Coach Darryl Sutter indicated after his postgame news conference the planned course of action was to send Quick to Los Angeles for evaluation by team doctors. He said that was the preferred option instead of having Quick evaluated on the road.

No transaction has officially taken place. Should the Kings make any roster move, it will be reported both on LA Kings Insider and Twitter. The Kings are scheduled to practice at First Niagara Center at 12:30 local time before flying to Long Island.

Originally signed by Los Angeles as an unrestricted free agent in October, 2008, Jones, 23, is 9-2-2 with a 2.24 goals against average and .927 save percentage with the Monarchs. After a brief holdout, he signed a two-year contract with the Kings in September.