Pride, emotion in the Nolan family

There has to be some crossover pun between Niagara Falls and the First Niagara Center as the Buffalo Sabres’ home overflowed and cascaded with story lines this morning.

On top of the Kings’ injury news and roster moves, the Sabres fired entrenched general manager Darcy Regier and head coach Ron Rolston and hired Pat LaFontaine as the president of hockey operations.

Brought on as the club’s interim head coach was Ted Nolan, Jordan Nolan’s father. Ted Nolan coached Buffalo from 1995-97 and the New York Islanders from 2006-08, winning the Jack Adams Award in 1997. He will continue to serve as Latvia’s head coach.

That the Sabres made such a sudden, drastic move isn’t a complete shock. The team ranks last in the NHL with nine points by virtue of a 4-15-1 record.

Changes were set in motion several days in advance, and as it turns out, Jordan Nolan is awfully good at keeping a secret.

“I had a call about three days ago from my mom saying they just received a call that it might be happening, they are kind of awaiting word from the owner,” he said. “So the owner called them, I think, two days ago and then they packed their bags and came down. Pretty exciting stuff.”

“We kept it a secret until this morning. We didn’t tell anyone. Once it leaked it was definitely emotional and it was funny how things turned out. It was good for him, and he is going to do well.” 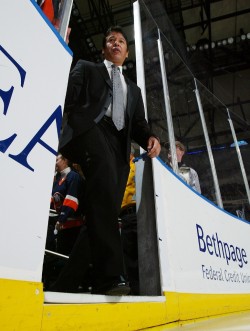 On how proud he is of his father:
We are definitely pretty proud, definitely emotional. He has been waiting a long time to get back in here, and to do it in this fashion and to come back to Buffalo – my brother’s in Whitby, and I’ve got friends in St. Catherines – it’s definitely good.

On what his father will venture to do with the Sabres:
Just try and turn around the atmosphere. They need to change a few things here – the way they work, the way they compete. He is a motivator. He gets the best out of people, so I am sure they will turn it around pretty quick.

On the sudden professional relationship with his father:
He will always be rooting for me. He has his side to worry about, and we’ve got my side. He is always going to be on my side rooting for me, but when we meet, it’s going to be an exciting game and I am looking forward to it.