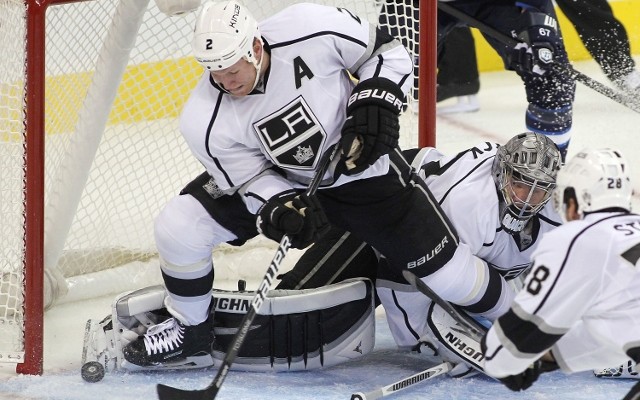 Matt Greene did not take the ice for practice Wednesday and is “banged up,” according to head coach Darryl Sutter.

The full transcript of Sutter’s comments on Greene: “Matt Greene’s banged up. It’s like Mystery Valley for me. It goes from legs to limbs to head. I don’t know what you’d call it, if it’s maintenance. [Reporter: But he’s ‘banged up’?] Yeah.”

Of marginal value but worth noting was that Greene did not attend Tuesday’s Meet the Players event at the L.A. Zoo, while Jeff Carter (lower body; injured reserve) and Jarret Stoll (upper body; day-to-day) did take part.

Greene, 30, has three points (2-1=3) and a team-best plus-5 rating while averaging 16:52 of ice time through the team’s first 15 games. He missed nearly three full months of the 2012-13 season after undergoing surgery to repair a herniated disc in his back, an injury suffered on the first day of the season.

Los Angeles went the first 14 games of the season without losing any man-games to injury. Since the win over San Jose last Wednesday – a stretch that includes one game, three practices and two recovery days – Carter, Stoll and Greene have all been affected by ailments of varying degrees.

Because Keaton Ellerby was claimed on waivers by Winnipeg, the Kings’ blue line would be reduced to six healthy defensemen on the roster should Greene need to miss any stretch of time. Such a development would necessitate a roster move.

Keep in mind that Sutter said “I don’t know what you’d call it, if it’s maintenance,” which raises the possibility that Greene simply needs a day off the ice. More will be learned during the team’s morning skate on Thursday.

Alec Martinez, who hasn’t played since October 17, was paired with Willie Mitchell during practice drills. Jake Muzzin and Drew Doughty skated together, as did Robyn Regehr and Slava Voynov.