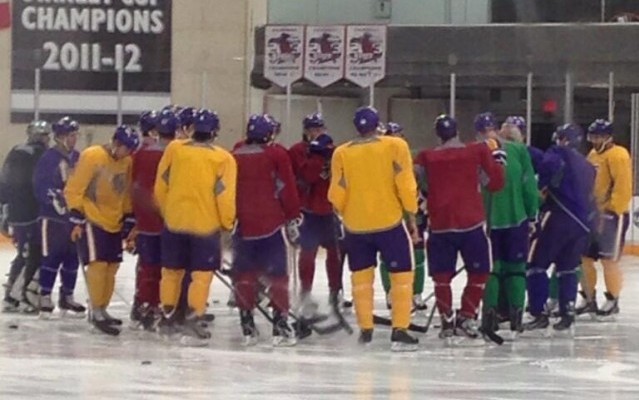 The Kings shifted their lines considerably at practice this morning.

By color-coding – while using Legends Night pants, glvoes and helmets – the lines were:

Though Alec Martinez was paired with Keaton Ellerby during initial line rushes, Darryl Sutter mentioned at the end of his press scrum that part of the reason for the adjustment was because “we’re trying Marty on left wing,” and “[We] like to get Jeff at center during some practices to stay sharp. One line was a power play line, so that’s what you can read into it.”

When Sutter was asked why try Martinez on LW, he replied, "someone has to play left wing." #LAKings

It’s not the most breaking news when a defenseman sees time as a forward. Dustin Byfuglien is the most prominent player in the league today capable of seeing time both up front and on the blue line, and Peter Harrold and Kevin Dallman have provided similarly versatile minutes for the Kings in the past.

This is the first time, however, that Alec Martinez’s name has been brandied in such a capacity.

“He’s not going to go in ahead of 13 forwards, but I’ve done it before with a defenseman to see if they can play there,” Sutter said. “Kids like Steve Montador, for example. He’s played probably 10 or 12 years in the league, and the way I could get him into the lineup once in a while was to move him up there, play him on right win. In fact, the year we went to the finals in Calgary, he played both positions. I mean, it’s not that big a deal. If he can skate and read the play, skate well enough to do things as a forward that are different than a defenseman, it’s not that big a deal.”

Sutter was blunt when asked about the length of time he had considered using Martinez as a forward.

“Every time he’s backchecking when he should have been skating backwards,” he said.

As he mentioned, “it’s not that big a deal.” Martinez didn’t skate as a left wing during line rushes early in practice, and he’s not going to be lining up on the left side during tomorrow’s morning skate.

As for the newly adjusted lines, Thursday’s skate will be a firmer indication of the degree in which they will be implemented when the homestand continues against the Phoenix Coyotes.