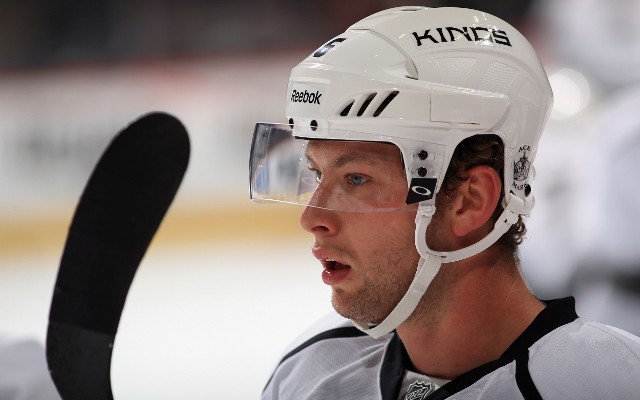 Darryl Sutter offered a harsh indictment of Jake Muzzin’s play to start the season following the team’s practice on Tuesday.

“He’s struggling a lot,” Sutter said. Though Muzzin scored the Kings lone goal as part of his 17:12 of ice time during the team’s 3-1 loss to the New York Rangers on Monday, he was also found to be at fault for the second period takeaway by Rick Nash that led to New York’s second goal. Through three games this season, the defenseman has one goal, one assist, and has compiled a team-worst minus-five rating.

“Muzzin [is] going to have to learn not to turn the puck over if he wants to play, period,” Sutter said after Monday’s game.

He expanded on his position on Tuesday.

“We went through it last year. He’s a young defenseman,” Sutter said. “There’s a lot of pressure on him, and he’s not quite prepared for those situations yet. You [saw] it in the playoffs last year, where he was a healthy scratch. So we’re going through that same thing again. Heck, you’re not going to win very many games if you’re a guy who’s playing significant minutes, and you’re a high-minus player.”

The Kings coach was then asked if that was part of the “typical learning curve” associated with breaking young defensemen into the NHL.

“He got hurt in Colorado,” Sutter answered. “We tried to ramp his training up this summer. He was a very unfit player when we got him last year. He was very fortunate to be on an NHL roster. He just worked on his fitness. That really hurt him in the playoffs, the pace of it. He did a really good job this summer of trying to get better there with his cardiovascular that we wanted him to and then he got hurt in Colorado, so he didn’t skate for a week…and then he didn’t have any contact. You know what? Probably shouldn’t have played him the first game. Should’ve bag skated him a couple more days there.”

Though Muzzin skated primarily with Matt Greene through the first three games of the season, Alec Martinez took rushes with Greene during Tuesday’s practice.

Could that be some foreshadowing of Wednesday’s alignment against Ottawa?

“No, it doesn’t mean nothing,” Sutter said.

During the preseason, Drew Doughty spoke highly of Muzzin and went as far as to advocate a more regular pairing with the 6-foot-3, 214 pound defenseman capable of rushing the puck and boasting a heavy shot from the point. The two skated as a pair through the middle of the 2012-13 season and often saw the ice together later in the season while the Kings were trailing late in games.