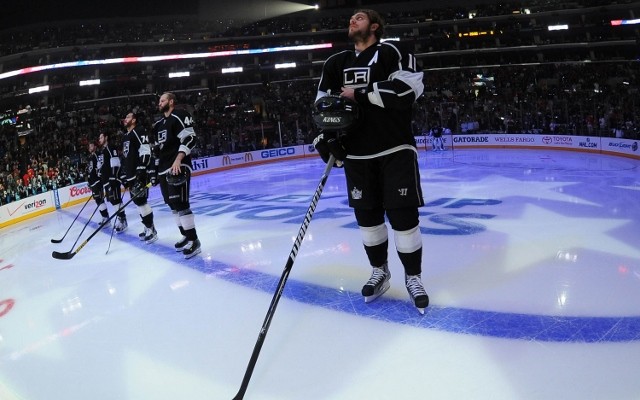 The Kings lines in practice today were:

-Should we read much into that? Maybe not, according to Darryl Sutter.

“Quite honest, there were three or four guys that we were going to give a maintenance day, and then they wanted to go, so…that’s what came out of the hat.”

Whether the lines stay the same at the morning skate tomorrow will be a much more firm indicator of whether there will be heavy changes to the previously established lines. Count on Alec Martinez making his season debut tomorrow; Daniel Carcillo is also likely to be in the mix.

-Though he never skated consistently with Jeff Carter, Carcillo estimated that he skated “30-so” games with Mike Richards while they played for Philadelphia.

“He’s just a smart hockey player. He’s got a high hockey IQ. Just going to read off him,” Carcillo said of Richards. “Whatever line I’m on, it doesn’t really matter. I know what my job is. Be first on pucks and win battles, and get to the net and get to those hard areas, and get them the puck and provide energy, and obviously just play the same way that I do on any of the lines, really.”

-Colin Fraser is a natural center that gained experience on the left wing while playing for Chicago’s AHL affiliates in Norfolk and Rockford due to a logjam of centers within the system.

He also saw scant time as a left wing alongside Jarret Stoll early in his tenure with the Kings – not that his placing is going to have much of an effect on his sandpaper tendencies.

From his perspective, there’s nothing wrong with mixing things up this early in the season.

“The NHL’s parity is so close, right? So you can’t fall behind the eight ball, because it’s hard to crawl back in. It seems you lose three, four, five in a row, you’re out of the playoffs, and you win three, four, five in a row, and you’re in first place. Definitely at a minimum we’ve got to keep pace, but obviously we want to be better than that. You approach every game, you want to win it. You’re not going to win every game, but if you’re going to lose, you’ve got to lose honestly, and kind of not the way we did last night.”

-Continuing the trend, Trevor Lewis wasn’t particularly concerned with where he lined up.

“It doesn’t really matter to me where I play, center left or right. I’m happy any way I can help the team,” he said. “I think we just need to find a little chemistry and balance, and maybe create a little more chances. I know our line the past few games hasn’t created as many chances as we’d like. We’ll see how it goes. I’m happy to play center or wherever. It’s fine with me.”

Prior to playing center during the San Jose playoff series last spring, Lewis was already familiar with the position.

“I grew up playing center, so I’m pretty comfortable with it. I think a couple of years ago I really was focusing on my faceoffs and getting better at those. I think I’ve gotten better at those, and like I said, it doesn’t matter to me where I play,” he said.

-Beginning with last night’s game against the Rangers, the Kings will play every other night through the October 21 home game against Calgary. The schedule dictates that players will take an odd maintenance day here and there, and lines at practices aren’t necessarily set in stone.

“Our schedule’s pretty intense here for quite a while, right until we come back from Nashville. So we’ll [play] every other day with a lot of travel, so we’ve got to be careful.”