Darryl Sutter on the impact of hybrid icing 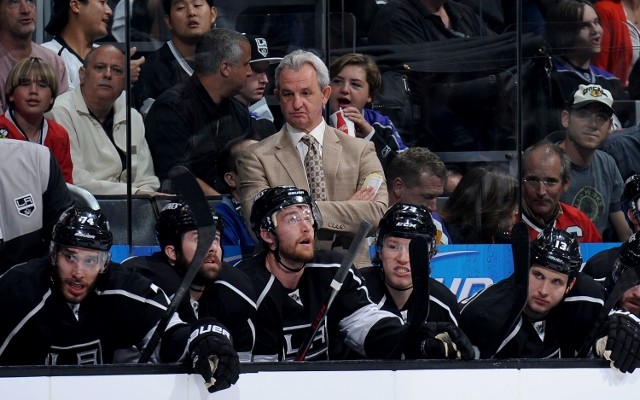 With Darryl Sutter’s previous quotes against hybrid icing kept in context, the sentiment he expressed following the Kings practice today appeared to represent an aversion towards the hastiness of the rule change as much as the modification of the rule itself.

On how he expects hybrid icing to change the game:
Obviously we’ve played it for seven games. Is it going to change the game at all? No. It’s still a race, and there’s still offensive plays that the linesmen have to make the right call on, because the dot is the line now – the faceoff dot – but the top of the circle of the dot, where there’s a big change in who’s got gold, silver, right? There’s a big change in there. Silver can be gold, as long as the linesmen make the call. It’s not a problem, but they’re going to have to blow the whistle sooner. They can’t make the call at the dot and then blow the whistle at the goal line. They’re going to have to make the call at the dot, and that’s the big difference in the game. We’re doing it now, but it’s so much faster than any other league. They did it in Europe, well it’s basically that no one’s forechecking anyways. Defensemen didn’t come back. As soon as it’s shot down, they just go back. They don’t even come to the blue line in Europe. In the American League, it’s obviously a slower league when they tried it last year, and as soon as the lockout started, it was no more. And in junior hockey and any place where they do it, well, it’s a totally different skill set. It’s like a horse that’s two furlongs ahead, well, you could call that from the booth.

On “the players” approving hybrid icing:
You know what? You ask the players, because, quite honest, it’s the only rule in the history of the game that the players actually decided on the night before the season started, which seems a little odd. And plus, go ask the players how many of them actually had a vote or say in it. If you say ‘players,’ does that mean 700 players, or does that mean 20 players? Go ask. I don’t know. It seems a little strange. Not ‘seems.’ ‘Is.’ I mean, hopefully they can’t make a rule up next week, too. What’s good about it? [Reporter: Just preventing injury, perhaps.] So, can you count in the last 10 years how many there were? [Reporter: I just read today about two, maybe in the last year.] Okay. [Reporter: It seemed to make the Olympic Games go faster. Like you know it’s icing, Tweet. Let’s go start it again.] That’s all right. Quite honest, I’m fine with it. But you talk to senior officials in the game that are way ahead of players that are 22 or 23 years old, that these guys have done it for 30 years, some of these guys are on the ice, they can’t find much in it.

On whether it’s “negative” that “judgment has been entered into a call”:
Well, a rim or a diagonal, is clearly not clear. You guys want to ask the questions, go take 20 of those icings, and see how many of them are rims or diagonals instead of just straight line plays, and they shouldn’t be called because the defenseman. Even though he’s ahead of the rim, the forward’s going to beat him all the time. All the time. [Reporter: So you’re saying that rims and diagonals shouldn’t be called, right?] Well, obviously they are now. They’re a judgment call, and at the end of the day there are a lot of those plays that are going to be from me to the wall, and they’re going to err on the side of caution. The player’s got to play it out. He’s still got to go as if he’s in a race. Clearly that’s what he has to do. And if the player lets up or becomes the referee or the linesman, they’re probably going to get scored on, and I’ll guarantee you there will be games this year decided on that, what they’ve seen as a missed call or an unsolved play on the players part that’ll be more dramatic than any injury that occurred in the history of it. [Reporter: You mean somebody will let up and then get beat to the puck?] Yeah, it’s a missed call. It’ll be a goal. I mean, our goalies are important parts – as most teams’ are – of plays also. The goalie, if he comes out of the crease, they’re going to wave that off. So he’s undecided, too.