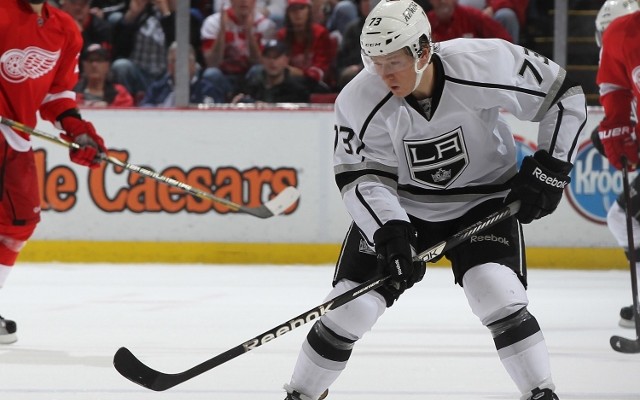 As had been speculated earlier today, Tanner Pearson, Linden Vey and Tyler Toffoli have been loaned to the Mancheseter Monarchs.

Along with Jeff Schultz being placed on waivers, the Kings are now down to the 21 skaters they’ll open the season with. The final decision in advance of the Monday afternoon deadline to set the 23-man roster is whether they’ll keep Ben Scrivens (who is under contract) or sign Mathieu Garon (who attended camp on a tryout).

We’ll gain a better sense of where players will align at practice this week, but barring any unforeseen variables, I’m leaning towards an opening day lineup that appears as such:

Though Darryl Sutter often spoke about the quality performances by the young forwards in training camp – a group that also includes center Nick Shore – it was going to be an uphill battle to unseat any of the established players.

Tanner Pearson appeared to have the best camp of the players reassigned today, though with Dwight King contributing with a productive preseason, and Daniel Carcillo and Kyle Clifford providing viable and versatile options, there are more available minutes for him to continue to develop in the American Hockey League, even with the Kings searching for consistent production along the left side. The Kings appear to have made very good use out of the 30th pick in the 2012 NHL Draft.

Linden Vey recorded one assist in four games and acquitted himself well in camp, though it remains to be seen where there will be a more apparent place for him to earn a roster spot. An impressive puck distributor who sees the ice well, the skilled Vey could project as a top-six forward with with continued development. At the moment, there are no holes for Vey in a top-six role as Anze Kopitar is signed through 2016 and Mike Richards is signed through 2020. Third line center Jarret Stoll will have his contract expire following the 2014-15 season.

Darryl Sutter hinted late in the 2012-13 season that plans could eventually develop to try right wing Tyler Toffoli out on the left side, though the plans never materialized in camp, and the LA Times reported earlier this month that Toffoli will remain a right wing.

“I don’t want to set Tyler back. That’s my thinking,” Sutter told Helene Elliott at the beginning of training camp.

In circumstances similar to Vey’s, there simply aren’t any immediate openings for Toffoli on the right wing. Justin Williams is signed through 2015, and Jeff Carter through 2022, though Trevor Lewis’ current contract expires in July. While Sutter never sounded down on Toffoli, the rookie winger didn’t exactly force the Kings’ hand with a four-game exhibition campaign in which he was held without a point.

The loans to Manchester provide the Kings excellent options and flexibility should there be any injuries, trades – or a lack of production – impacting any of the three forward positions. It is a similar situation to the one that opened the 2011-12 season, when Slava Voynov began the year in Manchester despite appearing capable of holding down a regular spot on the team’s blue line. After one call-up and a subsequent reassignment, Voynov joined the team permanently when Jack Johnson was sent to Columbus in the trade that brought Carter to the Kings. 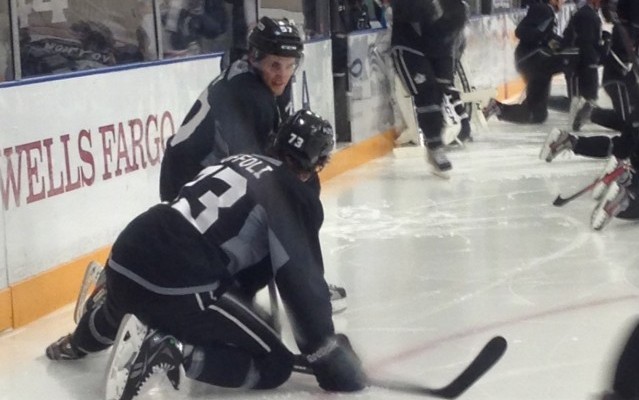