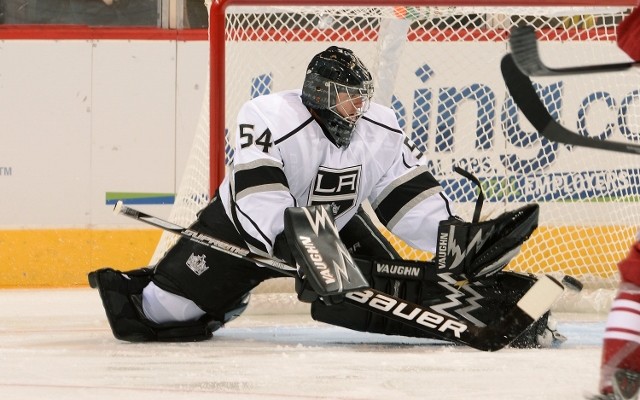 Ben Scrivens, on his first game as a King:
It’s something to build off of. Obviously not a perfect game, definitely not on my part. But there were some positives. It was good to get into a game and work through some of the stuff that Bill and Kim and myself have been trying to implement in practice, so you can’t really see how that’s going to go until get into a game, so today was the first chance at that. There were some good things and some bad things, and every game like this is a learning curve, so you’ve got try and just take what you can and move on.

Scrivens, on whether he goes into a preseason game looking for heavy usage:
Well, you never want to go into a game saying, ‘I want this’ or ‘I want that,’ because then if it doesn’t happen, you’ve put yourself behind the eight ball. So you just have to take it one shot at a time. It sounds cliché and repetitive and boring, but if you focus on the process, generally things are going to work in your favor. Today, a couple of rebounds you probably want back, but by and large I didn’t think I was getting beat just clean on shots. Like I said, a lot of positives, and we’ll see what we can build off of from there.

Scrivens, on generating a rhythm as the game progressed:
Yeah, I felt like I was more comfortable as the game went on. I think that’s probably just first game of the season getting your legs under you a little bit. But I definitely felt more comfortable. I felt like I was seeing pucks a lot better. I was able to control rebounds a little bit better in the second half, I thought. So hopefully there’s a continuation on into the next game that I get in, and I can start off where I finished this game, which I thought was on the right track.

Jordan Nolan, on the 4-2 loss to Phoenix:
You know, I thought we came out good. We god a little sidetracked there in the first period. We got into penalty trouble, and guys stopped moving their feet. But that’s going to happen in a preseason game. We’ve just got to bounce back in the next one.

Nolan, on his hit on Rusty Klesla:
I thought it was clean. He was skating through the middle of his ice, and I was just focusing on his chest , and I feel like I hit him square in the chest.

Nolan, on his first shift after exiting the penalty box:
You know, it’s pretty expected. Obviously their guys are going to stand up for their teammates. So I just kind of want to develop my game. I wasn’t looking for anything. I wasn’t trying to agitate anyone. Just kind of playing my game, and obviously they wanted to get me back a little bit.

Darryl Sutter, on the 4-2 preseason loss to Phoenix:
I think we had some guys play really good. Basically, just a special teams deal, right? A couple kids made mistakes on our power play for shorthanded goals against.

Sutter, on whether any stock was taken in the special teams struggles:
No, I think you saw who was on the ice for our power plays, so other than Muzz, there’s not many guys that are going to be on our power play who played tonight.

Sutter, on Ben Scrivens’ performance:
It’s hard to tell. The two five-on-three goals are [inaudible]. I think the second was deflected, so we’ll watch with him tomorrow and see.

Sutter, on the physicality of the game:
It wasn’t really physical game at all. It’s four or five hits, and some stuff after whistles, but not much went on.

Sutter, on what he would like to work on heading into the new week:
Let’s get some practices and get a game and go from there.

Dave Tippett, on Jordan Nolan’s hit on Rusty Klesla:
It seemed to me like a guy got hit in the head and a player left his feet. That’s not for me to diagnose, the league does a good job of those and when they feel like there is a violation they take action. So, the league will look at it and we will go from there.”

Tippett, on his team’s new players:
(In the) First 10 minutes people are kind of getting the feel for it, but then the kids; I thought (Forward) Max Domi, I thought (Forward Lucas) Lessio, big (Forward Henrik) Samuelson got going. (Defenseman Connor) Murphy was real strong on the back. We kind of got them eased into the game and then gave them a lot more ice time as we went along.

Tippett, on Lucas Lessio:
I’m not sure if that foot is bothering him… I like when a young player might be a little dinged up and you know what, he’s playing because he wants to make the team.

Shane Doan, on Nolan’s hit:
It’s something I assume will be looked at and it’s their job to make a ruling.

Doan, on the rivalry with Los Angeles:
We play each other enough… LA plays with a competitive edge. (It) brings out the best in some of us. It’s hockey, it’s fun.

John Stevens, on the home loss to Phoenix:
Well, not very good to be honest with you. We didn’t have good special teams on either side of the puck. The last power play had some good looks.

Stevens, on younger players:
The kid line there with Sabourin had a heck of a game, and Shore continued to work hard and get things done. I would guess that line had the majority of our chances. It’s great to see kids come in and take advantage of an opportunity.

Stevens, on any potential rust:
We just got to get going. That’s what preseason is for. We have to take a step up here and be more competitive on pucks and all the other parts of the game.

Matt Greene, on playing with a split-squad roster:
You got to get yourself going… at this point you got to worry about your own game not where other guys are playing.”

Derek Forbort, on his first preseason game:
It was fun getting out there with these guys

Scott Sabourin, on his performance:
Yeah it was good to get the first one out of the way… but it felt good out there.

Sabourin, on his physicality
If I don’t get a hit in early I feel like I sleep through the game. I know I have to protect the guys out there.

Sabourin, on playing with Shore and Zykov:
We have a lot of chemistry out there, we had a lot of chances… Especially being young guys, it’s nice to hear that… Excitement was probably it.