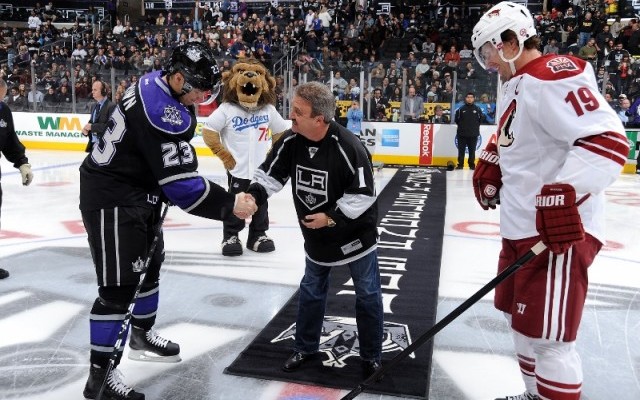 I was multitasking in the Dodgers’ dugout just at 6:00 p.m. Tuesday evening, chatting with John Hoven of Mayor’s Manor while hastily proofreading a post detailing the team’s training camp schedule and roster in advance of Matt Greene, Jeff Carter and Daniel Carcillo’s appearance on the infield.

And for a moment in the pregame preparation there appeared Ned Colletti, the Dodgers’ general manager and former Philadelphia Flyers beat writer for the Philadelphia Journal a generation ago.

Before Colletti strode past us in the direction of the tunnel that led to the Dodgers’ clubhouse, I politely introduced myself – he was already acquainted with Hoven from a previous interview – and ended up chatting for over 10 minutes about his background as a writer, his relationship with Dean Lombardi and the close ties within the sport of hockey that he has maintained with several key figures within the sport. It was a fascinating interview, and in addition to the quotes and audio posted below, make sure you read Mayor’s Manor on Wednesday to learn more about his relationship with Brian Burke – as well as his taste in cowboy boots.

Ned Colletti, on his background in hockey:
I grew up in Chicago a huge baseball fan, huge Cubs fan. And then in the wintertime, obviously, you don’t have any baseball. The Blackhawks were the team I followed, obviously, and all their road games were on TV, so I would watch all their road games. Going to Chicago Stadium was a very, very tough ticket, especially back in these days. It was the Original Six era, and Bobby Hull and Mikita and Glenn Hall, Kenny Wharram, Doug Mohns, I remember most of the team to this day. It just became something that I loved doing. I loved watching and playing and played into my later years, for a long time…They didn’t really have high school hockey. Collegiate hockey was club hockey. But I played in leagues really into my late 30’s, early 40’s.

Colletti, on his relationship with Dean Lombardi:
You know, I live about a mile from Dean. I live four blocks from Darryl, a couple blocks from John Stevens. Dean and I talk a lot. We don’t talk every day. He came out to a game this season. I obviously go to as many games as possible. We share the same passion for sport. We sometimes share the same challenges with our teams and we’re trying to get the most out of our players, and trying to do it in a way that’s successful for an organization, and we share a lot of successes. I was so happy for him a couple years ago when they won the Cup. I know the hours he puts in and the time him and his staff put in, and ownership, and what it meant to everybody. It was so cool to see.

Colletti, on his experience covering the Philadelphia Flyers:
It was on the tail end of [the Broad Street Bullies era]. When I covered the Flyers, it was the early 80’s. Actually, 79, 80, 81. The goalie was Pete Peeters, so it was before Hextall. Bobby Clarke was the captain. Billy Barber, Reggie Leach, Rick MacLeish, Jimmy Watson, Bob Dailey. I remember most of the guys that I had a chance to get to meet there. It was a very cool experience for me. To have a chance to write sports and to be involved in sports for my whole professional career, I’m humbled and I’m blessed to have done it, and my hockey experience back then led to a lot of great friendships. Back then, I’ll tell you kind of an interesting story. As it turned out, when I left Philly, I went back home to Chicago. My dad was dying, I was a young man, and my mom had never driven a car. So I went back there really to help out, and my brother was still in college at the time. So I went back, and I went to work for the Cubs. When I would go into Philly then, when the Cubs would play the Phillies, I’d stop over at the Spectrum and I’d see Bobby Clarke or Keith Allen, who was the GM when I was covering the team, and we’d just start talking and getting to know each other in a different way, because obviously the relationship was different at that point. They told me, they said, ‘You know what? There’s a guy that played for us for one year in the minor leagues that you should really get to know, because you two guys are very similar, and I think you guys would really hit it off.’ And I said, ‘Who is that?’ And they said, ‘Brian Burke.’ And I said, ‘Really.’ So decades went by. This might have been ’84, ’85, ’86. So I come out here in November of ’05, and in January of ’07, I go down to a Ducks game. I get a couple tickets, and in the envelope is Burkie’s business card, and he says ‘Stop on up and see me. I’d like to meet you.’ So I go up there and I meet Burkie, and I said, ‘We have some of the same friends,’ and it was Paul Holmgren and Bobby Clarke and…all these people from the Flyer organization. We hit it off that night and ended up becoming great friends to this day, really like 20-something years after I was told this was somebody you should get to know, because you guys would probably hit it off pretty well. So I’ve got friends in a lot of different teams. Ronny Hextall always used to give me a hard time, ‘It must be great being you, because every year your favorite team wins the Cup.’ The Kings gave me a jersey a few years ago – Dean and Marshall Dickerson and Hexy and Solly – with my name on the back, and Hexy gave it to me, he says, ‘Now you’ve got all 30.’ And I don’t – I’ve got some friends here and there – but they give me a lot of grief about being friends with a lot of different people, but it’s all in good fun.

The full audio of our conversation with Colletti: