Stoll: “I feel a hundred percent” 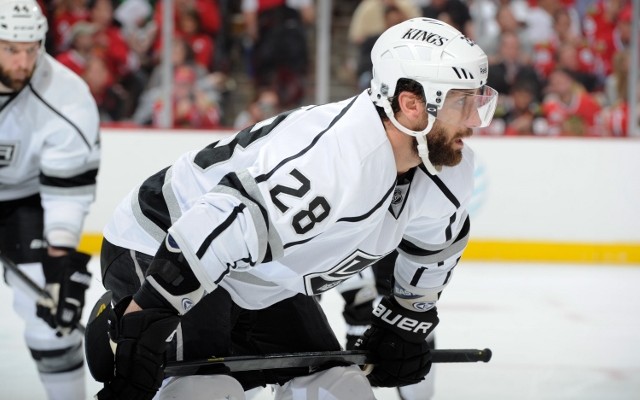 As training camps draw near, the off-season contingent of players who have skated regularly at Toyota Sports Center has been whittled down to mostly Los Angeles Kings. Buffalo Sabres goaltender Ryan Miller remained in town for Tuesday’s skate, as did Manhattan Beach native and former L.A. Junior King Tyler Maxwell, a minor league forward.

Following the skate, LAKI spoke with Jarret Stoll to get a feel for the progress of these pre-training camp skates while checking in with the center to learn more about his return from a frightening early July seizure.

Jarret Stoll, on how the off-season skates are organized:
“It’s not much work, honestly. We all want to skate. We all want to get ready for camp. It’s just a matter of contacting Brad Sholl with Toyota Center, and then seeing what he wants, seeing what’s available. Usually they do a great job of blocking off ice for us. It’s just making sure all the guys know what time it is, making sure we have two goaltenders, which is a key. It’s fun. We have fun out here. There’s guys from other teams earlier on in the summer, and then obviously closer to September it’s most of our guys. It’s a good way to get back on the ice, get back into shape and have some fun with the guys.”

Stoll, on whether focus increases as training camp draws near:
“It’s definitely a better flow out there, and the passes are on the tape now. That wasn’t the case probably a month and a half ago. It’s great to have everybody back, and we’re all excited about the season. We were disappointed with how last year ended, and we feel like we have a chance at getting back to the top and then having some more fun.”

Stoll, on his early July seizure, and how he currently feels:
“I feel fine. I feel a hundred percent. That’s not an issue. I think it’s more of an issue if people talk about it, and it’s just one of those things that happened that I wish didn’t, but it did. I’m just moving on looking forward to the start of the season. Medically cleared, all those things, had a great doctors take care of me in terms of getting ready for camp and being cleared for play. So that’s all taken care of.”

Stoll, on what he looks forward to most at training camp:
“I think just getting in that game shape, getting in that flow. Playing games, too – getting into some exhibition games, which will be huge. I wish the start of the season was here already. It’s one of those feelings that I think everybody’s feeling, and we’re all excited and pumped up. We have a great team, like I said, again. So you can’t wait to start camp and get on the ice and do our hard, tough skates at the end. That all builds a lot of character, builds a lot of things within your team, and we’re having a little trip to Mr. Anschutz’s ranch here coming up, leaving Thursday and coming back Saturday. So that should be a good team bonding experience, too.”

Stoll, on whether he’ll ride a horse at Philip Anschutz’s ranch:
“No, no horses. But we’re going to shoot some guns, we’re going to play some golf, we’re going to do some skeet shooting, fishing, all those types of things. Have breakfast, lunch and dinner together and live together in a big lodge for a couple days and play some cards. It’s a lot of fun.”