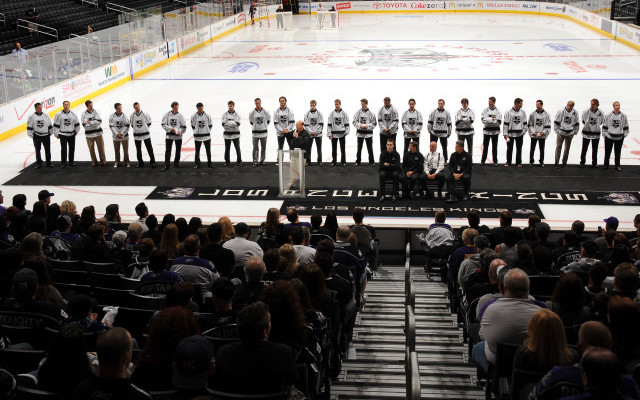 The schedule for Hockey Fest ’13 Presented by Pizza Hut was released by the Kings on Friday, and interspersed around autograph sessions and open skates will be panels featuring Dean Lombardi and the team’s coaches and hockey operations, the release of the Ice Crew Calendar, a press conference led by kids, a locker room tour, and a FOX Sports West panel. The event runs from 8:30 am to 4:30 pm at Staples Center on Sunday, September 8, with the Team LA Store remaining open to 5:00 pm.

If there’s one recommendation I can give without ever having attended Hockey Fest, it’s that you should not miss the “Town Hall” meeting, which kicks off the event at 9:00 am.

THE ‘TOWN HALL’ MEETING LED BY PRESIDENT/GENERAL MANAGER DEAN LOMBARDI is one of the first items on the menu, and rightfully so. Fans will have the chance to listen to Lombardi talk about the state of the franchise, and Lombardi will be joined by Assistant General Manager, Rob Blake; Head Coach, Darryl Sutter; and Vice President of Hockey Operations and Legal Affairs, Jeff Solomon.

Lombardi and Solomon faced an incredibly challenging summer as the salary cap decreased from 70.2 to 64.3 million dollars during an off-season in which 11 players contracts had expired, and managed to re-sign Slava Voynov for an appropriate rate while retaining Trevor Lewis, Kyle Clifford, Keaton Ellerby, Jordan Nolan, Alec Martinez and Jake Muzzin and adding free agents Daniel Carcillo and Jeff Schultz. Dustin Brown, whose current contract expires in 2014, was signed to an eight-year extension that carries a 5.75 million dollar cap hit.

“I’ve talked about having chemistry projects in the back room before,” Lombardi said in June. “Well, we’ve taken this to a nuclear science now in terms of how you put these equations together.”

Tickets for Hockey Fest cost $20 for season ticket and package holders, and $25 for the general public. Click here to purchase tickets.