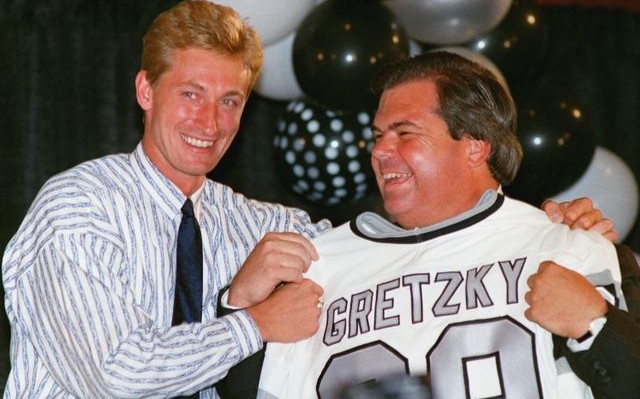 On August 9, 1988, the Los Angeles Kings acquired Wayne Gretzky, Marty McSorley and Mike Krushelnyski in exchange for Jimmy Carson, Martin Gelinas, first round draft picks in 1989, 1991 and 1993, and $15 million U.S. dollars in the most substantial trade in National Hockey League history.

In advance of The Trade’s 25th anniversary tomorrow, LA Kings Insider has spoken with several principals involved and will share their recollections and opinions of the events that came together in the summer of 1988. Yesterday LA Kings Insider posted Krushelnyski’s recollections. Today, Bruce McNall is LAKI’s guest. Because of audio challenges that arose as I transcribed our conversation, small sections of text that do not alter his viewpoints have been omitted.

LAKINGS INSIDER: When you took over control of the Kings, you were informed by Jerry Buss that Gretzky might be available from Edmonton. At what point during the summer of 1988 did the talks with Peter Pocklington really begin to take shape, and you felt a very good sense that this was going to happen?

BRUCE MCNALL: It wasn’t for a while. What happened was that although Jerry mentioned it to me, it was all sort of half-joking, and Peter sort of took it that way, so I never really thought of it until I saw him…prior to the draft in June. That’s when Peter said to me ‘Hey, if you’re serious about Gretzky, we could really do something.’ So at that moment, I felt obviously elated, and I felt, like, ‘Wow, there’s a real chance here.’ That was in June. Of course, things tend to progress by moving up and down as time went on, because at moments I thought the deal was off, and then it was back on, and there was a lot of that back-and-forth through July and August.

LAKI: When it got closer to August 9, Luc Robitaille’s name came up through one of the original reports. How were you able to negotiate that it was going to be Jimmy Carson, and that Marty McSorley and Mike Krushelnyski were going to be coming back to Los Angeles, and that Robitaille would not be a part of the trade?

BM: Actually, Gretzky was a big part of that because Wayne was insistent on getting Marty…so that was number one, and Mike Krushelnyski he thought would be a good add-on. He was really adamant about Marty. They were asking for Luc, and I absolutely did not [want to trade] Luc, and I would not do Luc…Part of that was seeing whether or not if I held on like that, whether they would in fact cave. Jimmy Carson – I also didn’t want to give up Jimmy as well. He was a big part of our young…team…He’s a center. He’s a first line center, and so he would be behind Gretzky. So it probably makes more sense. So, finally, after a lot of negotiations, I ended up [including] Jimmy as well.

LAKI: The first chat that you had with Wayne – how on board was he? Did you have to do any kind of selling? Those preliminary discussions with Wayne – what do you recall of them?

BM: He didn’t want to be in L.A. at all in the beginning. At all. He was an Oiler…I think he wasn’t thrilled about the idea at all. Then, later, we spent quite a bit more time together. We knew each other somewhat before, but then we started spending a lot more time together discussing the opportunity and the possibility to build the team…and at the same time, he’s hearing more and more rumors that in fact he is on the trading block…Vancouver and Detroit and some other teams might have been contacted or maybe contacted him. When we finally came to a deal…and it was going to happen, then immediately he was on board, and that was fine. But it took a little bit of time.

LAKI: What was that first conversation like when Glen Sather became involved?

BM: He was furious. Absolutely furious. He said that ‘It’s not going to happen,’ that ‘Pocklington has no right to do this.’…I guess [Peter] talked to Glen, and finally he agreed to speak with me. But at the very beginning, he was just absolutely adamant that this was not going to happen. Throughout the whole process…he was not a happy person at all. He was going through the motions, so to speak, trying to do the best he can to get the most he could for his team in return, but he was not happy.

LAKI: What do you recall from the introductory news conference with Gretzky, and seeing him in Kings colors for the first time?

BM: It was a bit surreal. Having come back from the Edmonton press conference, which was very emotional, I didn’t know what to expect from our press conference because normally for the Kings, if you had a beat writer and some local TV station, that would be a big press conference for us. So when I got to the chairs there, it was a mob scene. I couldn’t believe the attention we were already getting. By the time we got up there, and I did the announcement of Wayne, which at the same time debuted colors…and holding up the colors and having Wayne there, it was just surreal. I feel like I just couldn’t believe it. It was a moment that I couldn’t recreate in my life again. It was just amazing. I was a little bit shocked that it actually was happening, that this was going down, actually.

LAKI: When that happened, what changes had to be made to the front office? How many new people did you have to hire in public relations and ticketing? How did it change the size and performance of the front office?

BM: Well, I made some changes prior to the Gretzky trade insofar as trying to separate us from the Lakers. When I first bought the Kings, the Lakers-Kings personnel were interchangeable…When I got Gretzky, immediately it was crazy. The phones were going nuts, the ticket sales were crazy. So we ended up having to hire almost temporary people in the beginning, just to answer the phones, filling orders. It became insane. So of course we had to add a lot of marketing people, sponsorship people, ticket folks – I mean, everything just exploded at that time. I don’t know how many staff [members] were added., and I shopped around as well, because although I didn’t own the building – The Forum was still owned by Jerry Buss – Ogden Enterprises was the food service provider. They also had to add personnel, add on folks from their end. So it was an explosion across the board.

BM: Well, it went from a nice, very pleasant place where people could have dinner and a drink before the game to the hottest club in L.A. It became impossible to get in. People would be calling me – big movie stars, big executives, politicians, you name it – calling me trying to get into the club. I had a table that had about 40 people that I had reserved before the game for the sponsors and some of our personnel and so forth. It went from that to being the hottest ticket to get to.

BM: It was a preseason game. We were in Victoria for our Training Camp, and…I think the players, first of all, they were all getting autographs from Wayne. They were getting sticks signed and so forth. A lot of them didn’t know if they were going to make the team or not, I guess, and they were going to make sure that they got whatever they could to prove they were with Wayne – autographs and this and that with Wayne at training camp. I think once he got on the ice, Wayne’s always excited to make every player feel comfortable and a part of everything. That’s always what he’s kind of been, so that’s what he did. He tried to calm everybody down, because I don’t think they worked together very effectively very quickly. I think the players were all pretty excited and pretty shocked…a little bit wide eyed.