There have not been a lot of successful sports motion pictures with hockey as the central theme.  The most talked about down through the years is the “cult” classic Slap Shot, starring Paul Newman. 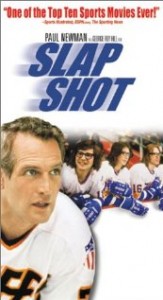 In October of 1992, a hockey movie premiered in which I was asked to be a part of as the announcer.  It was a Disney movie titled “Mighty Ducks,” written by Steven Brill, about a pee-wee hockey team starring Emilio Estevez as coach.  The movie received savage reviews by the critics, but it became very popular with audiences. Filmed with a budget of $10 million, it grossed over $50 million, and inspired two sequels and the name of a future NHL team. 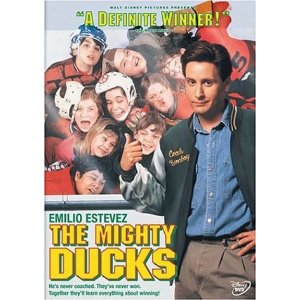 My job was to do the “voice over” as the play-by-play announcer.  I recorded the sound in a studio on the Disney lot.  I remember as I entered the studio, I saw a plaque on the building which read, “Original studio for the sound track of Wizard of Oz.”  The hockey scenes had already been filmed, and the script included some non-traditional descriptions such as the “Triple Deke” and the “Flying Vee” formations.

Two years later in 1994, I was asked to be in the cast of the sequel, “D2: The Mighty Ducks,” but this time with an “on camera” part.  The hockey action scenes were filmed at what was then known as the Arrowhead Pond in Anaheim.  I was told be at the arena at 11 a.m., and I had just a short on camera scene of about 30 seconds. 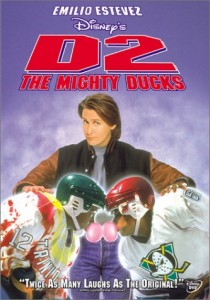 I had never done an on camera scene in a motion picture before, and I’ve decided I don’t think I would have much patience for that type of work.  When I arrived, I was told I would have my own trailer to relax in until they shot my scene. I sat in there alone for a while, and then was told it was time for lunch.  I hadn’t even done anything yet, but it was time to eat.

After lunch, I decided to take a look inside the arena to watch the filming.  I was amazed by the size of the crowd on hand, until I noticed most of them weren’t moving. Upon closer inspection, I discovered most of them were cardboard depictions of people in the seats.  I waited and waited to be called for my scene, and it was finally filmed at around 8 p.m. that night.  So I had waited about nine hours to do a 30-second bit.

That film, the second of the Mighty Ducks trilogy, was not as financially successful as the first movie, but it still grossed over $45 million.  It featured some NHL stars such as Wayne Gretzky and Luc Robitaille of the Kings, Chris Chelios, who played with Montreal, Chicago, Detroit and Atlanta, and Cam Neely of Vancouver and Boston.

Some of the strange hockey maneuvers I had to describe included a fluttering shot called the “Knucklepuck,” a scene where a Ducks player from Austin, Texas, lassoes an opposing player, and a spinning shot by an Asian player named Kenny Wu. After he scored, I had to shout, “Woo, Woo, Woo.”  To this day, I still have some hockey fans ask me to say that again because they know every line from the movie.

Former NHL star, Joel Otto, who played with Calgary and Philadelphia, said to me once, ‘You are on TV in my house everyday as my kids constantly watch the Mighty Ducks movies, and I’m sick of it.’

The Mighty Duck movies are continually played still today on TV in the U.S. as well as in the United Kingdom and Australia.  A third Mighty Ducks movie was set in a prep school, but I did not have a role in that film.

In 1993 – a year after the first movie came out – the NHL granted a franchise to Anaheim. The team was owned by Disney and was named the Mighty Ducks.  Although it wasn’t the Ducks of the NHL, I like to say that I am the answer to the following trivia question: Who was the first announcer for the Mighty Ducks?

So a film trilogy that many critics bashed and a lot of people thought would not amount to much, is still being enjoyed today and it has grossed millions of dollars for Walt Disney Pictures