This Bud is for Pete Demers 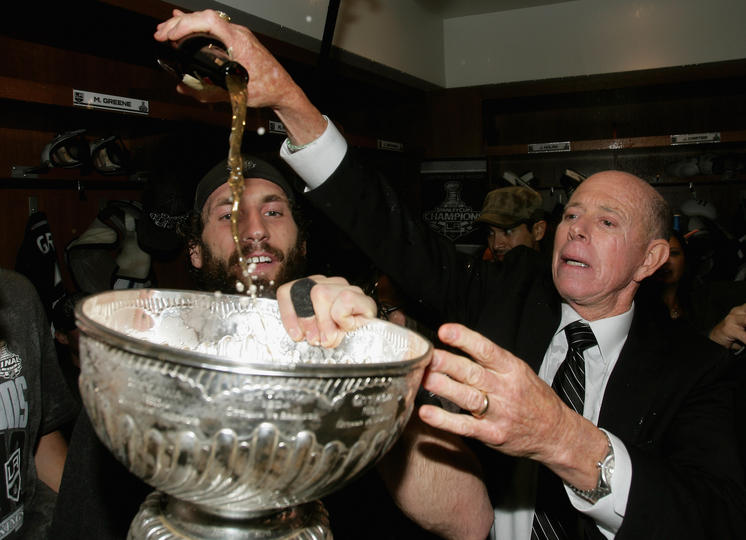 When an organization such as the Kings wins the Stanley Cup after 45 years, there are some very happy people who have waited a very long time. One of them is Hall of Fame trainer Pete Demers, who was officially with the organization from 1969-2006 and has stayed close as an active member of the alumni association. The hallway of the Kings’ training facility is lined with team photos, and Demers is in more of them than anyone. In 1993, Demers saved a bottle of Budweiser, and in the locker-room celebration after Game 6, Demers poured it into the Stanley Cup and downed the sweetest-tasting stale beer of his life. Afterward, Demers posted his thoughts on Facebook, and he graciously gave me permission to share them with everyone…

DEMERS: “I am lost for words. What a win. Went to the locker room with my son Tom after the game. Had a bottle of Bud with me that I have saved since the 1993 final in Montreal. When it was my turn, I poured it into the Stanley Cup and the players poured it down the hatch (and on my suit) while they chanted Pete-Pete-Pete. How bout that! And that old rotten beer tasted great. For me, also special was when Tom drank from the Cup. Thats what life is all about it. To see my son drink from the Stanley Cup brought me to my knees. I cried when I hoisted the Cup over my head.

“I am so grateful to have had such a wonderful hockey career with so many highlights and great memories. We all know the game is about the players not about the trainers but tonight, so many of the players and staff said `Pete, enjoy it as you are a big part of this moment,’ which was kind of all of them.

“After being behind the bench for 34 years here in L.A, 3 years down on the farm with the Springfield Kings, (Calder Cup 1971) plus 6 years Kings Alumni Community Service since my retirement, it was well worth the wait since my first Kings Training Camp in 1969.

“I am so proud to remain part of the greatest organization in the greatest game in the world. You can bet my 2,632 consecutive Kings games that I will be at the parade. Daughter Aimee will be watching from Toyko. Thanks to our loyal fans for hanging in there all these years.

“I am so thankful to be a King for life and will never forget this special night when the Kings won the Stanley Cup.’’