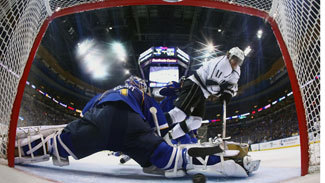 The St. Louis Blues were hungry for revenge. Upset with the Kings — and particularly Dwight King, whose hit took top defenseman Alex Pietrangelo out of the lineup for Game 2 — the Blues came out hitting. That’s understandable,. Problem is, at some points the Blues seemed more concerned about hitting the Kings than beating them. The Blues delivered a series of teeth-rattling hits, but the Kings didn’t wilt. Yes, the Blues sit a physical tone in the first period, but they also recorded only five shots on goal and allowed four goals. That’s not a formula for success. Count on that changing in Game 3. The Blues made their statement, and knocked the Kings around, but the Blues are more effective when they simply forecheck aggressively and fight for loose pucks. The Blues have to find some answers, particularly on the power play, and they can’t afford another period like the first period last night. Here’s how the St. Louis Post-Dispatch and the Belleville News-Democrat covered last night’s game, followed by some additional postgame quotes from the Blues…

(on the game…) “In the playoffs, it’s one loss, so you move on. I think there are some obvious things that we have to address. Power play is costing us in a big way. We’re going to have to address that again. It’s hurting us. Shorthanded goals build a lot of momentum. We’ve had two shorthanded goals in the two games, taking away our momentum. Careless plays by us. And full marks to them. Their emotional investment in the first period was greater than ours. We started to play later, but you don’t know how much they’re sitting back, so it’s a hard read for them. And their goalie was good again. We pounded a lot of shots in the last two periods, but still, we only scored two goals. We’ve got to invest a lot more, early in the game. And like I said, that’s the nice part about playoffs. It’s one game, it’s one loss. Move on.”

(on the game…) “They’re full marks. They checked us hard. They checked us hard and we coughed up the puck. We made mistakes. To me, the first goal was a perfect example. The game is at a furious pace, and we’ve just got to get it deep, and we try to make an extra play. We’re trying to create something from nothing, and next thing you know, we’re picking it out of our net. That’s an attitude. We’re trying to force offense. The way we finished Game 1 is the same way we started Game 2. We’re trying to force offense when it’s not there. They’re pressing up, and we’ve just got to make them turn, like we did in the second and third period. When you try to force offense, you try to play east-west. Against this team, they check too well, and they just turned the puck right up on us, three times, and two were in the net.’’

(on the status of injured defenseman Alex Pietrangelo…) “He’s day-to-day. He’s tried it today, and he’s still sore. It’s a big hole. Not a lot different if they lost Doughty. Same thing. But I think, with the full two days off, hopefully he’s good to go. Unfortunately, he couldn’t play today, but we need him back in the lineup if we’re going to… Our job, right now, is to come back to our fans here. That’s our job. Win one of the next two games, to get it back here. We’ve played awful well on the road in the playoffs. Like I said, it’s only one loss. It doesn’t feel good right now. The first period doesn’t feel good. The way we played on the power play doesn’t feel good. We’ve got two days to regroup here and put our best foot forward. All you can do is ask for your best, and today was not our best. Today’s first period was not our best. We need to make amends for ourselves.’’

(on the status of injured goalie Jaroslav Halak…) “Jaro is out for the series. He won’t play in the series.’’

(on the game…) “It was just a bad start. Guys weren’t ready to go, and they were. We knew they were going to be coming out firing, getting that first (win) under their belt and having a chance to win two and go back to their barn for the second two. They just came out firing, and we weren’t ready, physically and mentally. Most importantly, mentally. We need to be smarter. We need to work smarter.’’

(on the frustration with the poor start…) “It’s very frustrating, because we know our game plan. We know what we need to do when we are successful, and we didn’t do that here tonight. It should be a staple of our game, to get the puck deep and play good team defense, and that was nowhere to be found in the first period.’’

(on the game…) “If we play like we did tonight, with not enough guys going, it’s going to be tough to win wherever we are. If we’re playing on the moon, we’re not going to win.’’