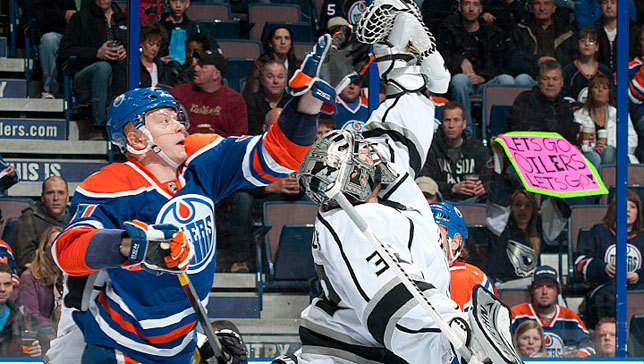 It’s not difficult to see how the Edmonton Oilers might be able to put all the pieces together someday soon. They have a deep group of young forwards, and one of the best, Taylor Hall, didn’t even play last night because of injury. The Oilers will need to upgrade their defense, and need to decide whether Devan Dubnyk is their goalie of the future or whether they will pursue a long-term option via trade or free agency. But make no mistake, the Oilers, even though they will finish near the bottom of the Western Conference again this season, are in better long-term shape than a lot of teams. Last night’s game was not one of the Oilers’ finest. The Kings were attentive on defense and aggressive on offense, and overall, they played a more mature game than the Oilers. That’s to be expected. Also, the Kings knew that they couldn’t take the Oilers lightly, given that the Oilers had already handed them two defeats this season. The teams will meet again on Monday at Staples Center. Here’s how the Edmonton Journal and the Edmonton Sun covered last night’s game, followed by some additional postgame quotes from the Oilers’ locker room, courtesy of The Associated Press…

COACH TOM RENNEY
(on the game…) “They were stronger and more determined than us. The Kings are a desperate team. They were right there on the cusp of being in the playoffs and they are playing with every bit of urgency you can possibly imagine. And we’re hanging on for dear life trying not to embarrass ourselves. When you do that, that’s exactly what happens.’’