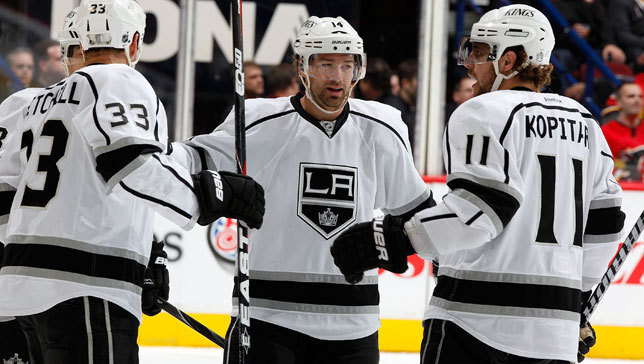 — The Kings moved back into a playoff spot as they beat the Calgary Flames 3-0 on Wednesday night at Scotiabank Saddledome.

— With 88 points, the Kings are in seventh place in the Western Conference, one point behind Pacific Division-leading (and third-place) Dallas, tied in points with eighth-place San Jose (the Kings hold the tiebreaker) and one point ahead of ninth-place Phoenix.

— Jonathan Quick made 19 saves for his ninth shutout of the season, which set a new Kings single-season record. Vachon held the record, with eight shutouts in the 1976-77 season. Quick allowed a total of three goals in four games against Calgary this season.

— The Kings finished the season series against Calgary with a 2-1-1 record.

— The Kings have a 25-1-2 record this season when they score at least three goals in a game.

— Willie Mitchell scored a goal, his fifth goal and 19th point of the season. Mitchell has tied a career-high for goals in a season (he also had five goals last season).

— Dustin Brown scored a goal, his 20th goal and 48th point of the season. Brown has reached the 20-goal mark in five consecutive seasons (he had a career-high 33 goals in 2007-08). Brown had three goals and one assist in four games against Calgary this season.

— Justin Williams scored an empty-net goal, his 19th goal and 54th point of the season. Williams has four goals and five assists in his last 10 games. Williams had one goal and three assists in four games against Calgary this season.

— Slava Voynov had one assist, his 12th assist and 19th point of the season.

— Drew Doughty had one assist, his 26th assist and 35th point of the season. Doughty has one goal and six assists in his last eight games.